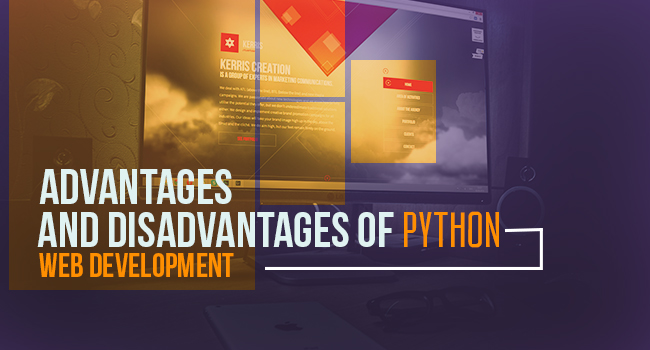 Python is an advanced, interpreted and general-purpose dynamic programming language which is preferred among programmers over Java and C++.

With a focus on code readability and making programming easy, Python was founded in 1991 by the developer Guido Van Rossum. The language is highly useful for a range of applications such as web development, scientific computing, and education.

Since big organizations like Google and Instagram commonly have vital and object-oriented functional programming, these opt to use Python for its numerous programming standards.

The language is also well-known among developers for its comprehensive nature and large standard library with automatic memory management and vibrant features.

While the language comes with a range of benefits, a number of companies have begun delivering solutions in Python and trying to be the best Python web development company in Pune.

Whether a programmer has a previous exposure and knowledge of programming languages, Python is one such language that doesn’t require one to have specialized skills of coding. It can be used easily by both programmers and non-programmers owing to its easy to use syntax.

Easy to learn and understand, Python is one such programming language that makes it user-friendly and comprehensive. The language is also highly efficient as well as requires less coding, which, in turn, makes it readable and efficient.

3. Acts as foundation to learn other languages

An individual who steps into the world of programming with Python may find it easier to learn and grasp the concepts of other programming languages that are similar.

What’s more impressive about Python is that its object-oriented principles are compatible with other languages like JavaScript and Ruby in comparison to other languages.

Since the language is much easier as compared to other languages, building prototypes and ideas are much quicker in Python. Doing these helps in saving a lot of time and cost involved in the project as using Python makes the creation of prototypes easier, which, in turn, helps save a lot of time, cost, and expense of the company.

Python is not limited to its own world. Rather, a number of other programming languages also have its implementations integrated into its systems.

Some of the common examples include CPython, a version with C; IronPython, which is designed for compatibility with .NET and C#; PyObjc, or Python written with ObjectiveC toolkits; and others.

Apart from these, Python also has a number of resources, has a high-level web framework, is pocket-friendly and is loved by tech giants.

With a large number of pros, the language also has a variety of cons as well. Some of these are mentioned below:

Speed can be an issue when using Python. This is because it is an interpreted language. There are also certain benchmarks of Python code that are run under PyPy and actually run faster than the equivalent C code or others.

Although Python is available and present on many servers and desktop platforms, the language’s drawback is in terms of its weakness in mobile computing.

And, this is one of the main reasons why a limited number of mobile applications are developed using Python. What’s more is that the language is not present in web browsers as it is hard to secure.

One of the major drawbacks of this language is that its design has numerous issues. Another trouble with Python is that it is dynamically typed, which generally requires more testing resulting in numerous errors that show up only at runtime.

The rules of the language are vulnerable enough to land a person in some or the other form of trouble. With its late-binding dynamic models and extensive libraries, shifting to a new language from Python gets difficult as the user finds it difficult to adjust to its vulnerable nature and taking everything on a light note.

As compared to other programming languages like Java and C++, the database access layer of Python is underdeveloped and primitive in nature. This, in turn, acts as a major barrier when big enterprises look for a language that ensures smooth interaction of complex legacy data.

Know More : How is Python Being Used At Facebook?

Python is a robust programming language with minimal stress and worries. But, this language is highly insecure and can be used only at one’s own risk. The Python web development company in Pune makes sure that even when a product has been developed using Python, it does not crash quickly due to bugs, errors or viruses.

One must stay extra cautious and careful about when to use Python and the scenarios in which opting for some other programming language would be a better option.