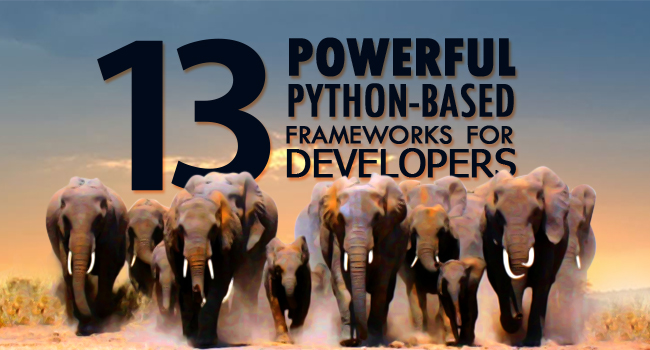 It is often used by system administrators, machine learning engineers, desktop and web developers, and data scientists.  It is easily understandable and a powerful language to develop any type of system.

A framework is a code library which makes it easier to build scalable, maintainable and reliable web applications by providing re-usable code or extensions for regular operations.

Django is a high level and most popular web framework for Python.  This high-level and well-organized framework simplifies the development of big and complicated web applications by giving a number of strong features.

The developers of Django can take benefit from the in-built security features given by cross-site scripting, clickjacking, Django prevents SQL injection and cross-site request forgery. On contrary, Django also helps programmers to control the website instantly to tackle a sudden spike in traffic.

TurboGears is designed in a way that it overcomes the deficiency of various widely used web frameworks. Python also consists of all written, data-driven web application frameworks. It allows developers and programmers to start creating web applications with the nominal setup.

TurboGears supports numerous databases and data exchange formats and horizontal data division. It also allows developers to ease web application development by taking in use different JavaScript development tools. The programmers can also use Pylons as a web server along with getting benefited by SQLAlchemy and an ORM system.

Tornado is a Python web framework. It is was originally developed at FriendFeed. Tornado uses the non-blocking network I/O, by which it can scale thousands of open connections making it just perfect for WebSockets, long polling and other apps that need a long-lived connection to every user.

Tornado cab installed with pip or easy install. Tornado runs on any Unix-like platform but Linux and BSD are recommended for the best performance and scalability.

Web2Py eases down custom web application development, including practical batteries such as a web server, SQL database, and an interface based on a web. It allows programmers to build, modify, manage and change the web application’s efficiency by web browsers.

Zope is also a Python-based, open source web application server. The programmers can further enhance Zope as per their requirement through Python code. Zope is completely different from other web frameworks. It is an object-oriented web application development platform.

Zope Toolkit technology is used to develop a web framework for Python, in Grok. It allows Python users to boost their web application development by using toolkits of Zope libraries, as a set. The programmers have an option to select from a broad range of standalone and group libraries according to the need of the specific project.

The constituent planning used by Gork helps Python developers to reduce complexity in web application development by taking benefit of views, controller, and content objects.  Grok also helps by providing all the necessary resources required to create custom web applications as per the various business needs.

CherryPy is also designed as an object-oriented web framework for Python. It boosts web application development by giving developers an access to write short and brief code, based on object-oriented programming (OOPS) principles.

But programmers can still simplify custom web application development by getting benefited through the in-built tools offered by CherryPy for static content, sessions, caching, and sessions.

CherryPy is now more than ten years old, and its stability and efficiency is just the same. It is used by many sites for production. CherryPy is one of the oldest we frameworks available for Python, yet it is unknown for many people. It is so because CherryPy is not equipped with in-built support. It also supports profiling, testing, and coverage.

In Flask, the web framework for python is developed based on Jinja 2 templating language. Flask boosts web application development by providing an in-built debugger and development server.

It also helps in securing integrated unit testing, Jinja 2 templating, RESTful request dispatching, and cookies. The programmers can use particular extensions to extend Flask as per the project’s specific needs.

Quixote is a framework used for writing Web-based applications using Python. Its objectives are flexible and high performance when taken into consideration with developing a web application. It includes two major versions, version 1 and version 2 and uses two outsourced libraries,  Jinja2 template engine, and the Werkzeug WSGI toolkit.

They are quite similar but incompatible with each other. These are actively maintained and are frequently used by various public sites. It also has a demo as part of the Quixote distribution.

It offers a basic example of a Quixote application and serves as a template for new applications. Quixote is an open source framework.

Divmod Nevow is a web application toolkit written in Python. It allows the developer to demonstrate the view logic as desired in Python, including a clear Python XML expression syntax named stan to ease this.

Divmod also comprises of Divmod Athena, which is a “two-way web” or “COMET” execution. This acts as a two-way bridge between the server’s Python code and JavaScript code on the client.

BlueBream is also an open source web application framework, server, and library for web developers. It is created by the Zope community and presently known as Zope 3.

This framework is best suitable for both medium and large projects divided into many re-usable and interchangeable components. BlueBream is based on Zoop Toolkit (ZTK). It holds years of experience ensuring that it meets the necessary requirement for consistent, stable and scalable software.

The bottle is a simple, light and fast WSGI micro web-framework for Python. It is issued as a file and does not rely on any library other than the python standard library.

Bottle takes into use a world-wide list of search tracks (bottle.TEMPLATE_PATH) to discover templates on the file system. The Bottle’s  Routing requests function-call mapping along with the support for pure and flexible URLs.

This is very useful and can take you quite far while learning. Pyramid simultaneously offers you many features as your application grows. It makes writing complicated software easy and effortless.

The pyramid is compatible with all supported versions of Python. In-Built value is provided by Full-stack frameworks that tell it what to do. On contrary, the thought of doing something unique or using something better leads to unexpected challenges in the framework.

Pyramid has a very small and slow start but it provides you with many high-quality choices. It is distinctively equipped to scale.

In future, Web developers will have the opportunity to choose from a more wide range of Python frameworks. Some of the above-mentioned frameworks are full-stack, whereas others are not.

Similarly, some of these web frameworks are getting an update which will for sure; compliment the emerging web application development shift.  Therefore, programmers will be able to develop a web application in a more accurate, efficient, and convenient way.

Previous How Long does it Take to Build a Website?
Next Wish To Know The Duration of Redesigning a Website?