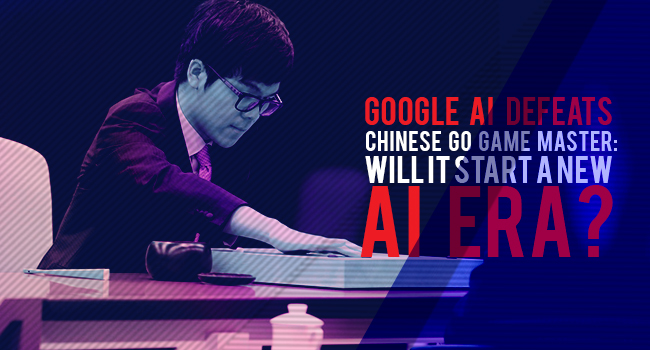 Artificial Intelligence stole the limelight when it registered a victory against the South Korean grand master before proceeding to win over the world champion.

Alpha Go, the Artificial Intelligence program developed by the Deep Mind Labs of Google has defeated the Chinese grand master at the traditional board game called Go, thereby creating a buzz about AI winning over humans in games. But, when looking beyond games and the fun, it looks like the investors would gain a lot from such real-world applications of the future. This match held as the benchmark to measure the intrusion of Artificial Intelligence upon the activities of humans is a significant milestone for the technology firms.

How Google AI Emerged As The Winner?

The ancient 2500-year-old game of China, Go is considered as the highly sophisticated and complex board game and was one among the games that were not yet mastered by the computers. AlphaGo has two neural networks that were AI based, each having a combination of algorithms and software modelled based on the human brain’s structure. One neural network narrowed down the closely infinite moves to the ones which had the likely chance of playing.

The second one analyzed the best moves for determining which one would lead to the victory of the game. The programmers of AlphaGo offered it a database with 30 million board positions that were acquired through 160,000 actual games for analyzing and splitting to let it play on its own and learn during the process. This strategy made the Google AI beat the grand master on the 19 X 19 grid.

DemisHassabis, the founder of DeepMind, the AI subsidiary of Google has said that games are the perfect choice for training AlphaGo, but they don’t wish to use it just for games. He also stated that Google wants to apply Artificial Intelligence technology in different domains to handle an array of challenging tasks. It shows the power of harnessing such mechanisms that are biologically inspired with advanced machine learning techniques for creating agents with the ability to learn and master various activities.

Is It The Beginning Of New Era For Artificial Intelligence?

Becoming the master of the highly sophisticated board game is considered as just the beginning of Artificial Intelligence, as technology companies are planning to utilize AI for all computer programmes to meet the demands of varied purposes right from education to healthcare.

IntelligentX of the UK has plans to launch the first of its kind beer brewed by Artificial Intelligence while the Hoofstep of Sweden is interested in using in-depth behavioral analysis based on learning for horses and the Russian DeepFish firm is expected to use neural networks for finding fish.

Experts are of the opinion that AI would have a significant impact in multiple fields in the coming years. Let’s take a look at what AI will have in store for us in the future.

In factories, the assembly lies with labor-intensive tasks would be performed by the robots that are programmed with AI and not by humans. It will lower the hiring costs and cut down offshore and outsourcing expenses. Last year, a Chinese T-shirt maker signed a deal with the government of Arkansas for employing sewing robots that were developed by a startup in Georgia to manufacture garments. It is estimated that by the year 2025, the robots instead of the caretakers will be handling most of the elderly care.

The requirement for the algorithm based Artificial Intelligence is on the rise, as the online attacks are continually evolving and latest types of malware are profoundly challenging to handle. Using AI for cybersecurity would be an added advantage, as it is capable of operating with scale and can look through millions of online attacks to identify the signals, risks and aberrations of the future threats. Fresh cybersecurity companies in the market have already begun to leverage machine learning to tackle cyber-attacks.

AI is not only limited to huge and powerful devices like the supercomputers, as it is now widely used by wearable devices and smartphones. Edge computing is considered as the next big thing in AI. The Consumer Electronics Show held this year was a fine specimen that showed how the current devices relied on voice-enabled computing. Apple has introduced the neural engine and A11 chip for iPhone 8 devices while claiming that it can handle the machine learning tasks at the pace of 600B ops. The devices of Samsung are connected with internet and will feature Bixby, the voice assistant of its own by the year 2020.

The US regulators are interested in offering approval for using AI in the healthcare sector. Using this technology in diagnostics would help in early detection and diagnosing a medical condition with better accuracy. Right now, SkinVision, the AI monitoring tool is already used for identifying peculiar boils on the skin. The Anglo–Swedish biopharmaceutical and pharmaceutical firm, AstraZeneca and its partner Ali Health is involved in developing the diagnostics and screening AI assisted tool. Nvidia and GE have also partnered for creating medical imaging devices equipped with in-depth learning abilities.

Technology giants like Microsoft, Amazon, Salesforce, and Google have enhanced their enterprise AI prowess, which has made it highly challenging for the small player to sustain in the field. Google has introduced Cloud AutoML to help their customers bring their data for training the algorithms to cater to their unique needs. The Amazon AI service by Amazon has helped it fulfill its aim of serving big.

Overall, it is evident that Artificial Intelligence has an optimistic future. In spite of being a disruptive technology, AI can also bring in dramatic changes. Though this technology would automate several jobs and cut down the job opportunities for people, AI can be looked upon as a positive opportunity rather than being a threat.

Previous PrestaShop 1.7.3: Features and Improvements
Next Setting up Sublime Text 3 for Python development