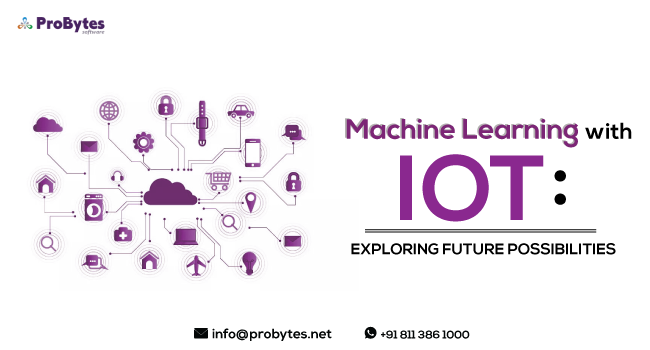 Now, imagine the scope for growth and development when the two self-developing technologies are brought together. Though IoT and ML are being used across horizontals and vectors, data scientists believe that we are still in the nascent stage and there’s a whole new world of opportunities that we need to explore.

Internet of Technologies or IoT can be described as a network of machines that can be programmed to work in synchrony. The devices are also programmed to interact with the external and internal environment and react accordingly. The number of devices that can be connected in an IoT network can be anywhere from 2 or 3 to hundreds.

The entire network is built based on sensor technology. IoT finds applications in smart homes, automated cars, precision farming, connected grids, smart retail, and lots more. Market research by Grand View Research shows that the market size of IoT has been gradually growing from 2012 in sectors such as healthcare, consumer electronics, manufacturing, transportation, retail, and others.

The largest utilizer of IoT technology is the consumer electronics sector, which is projected to go up by nearly 100 percent by 2022.

What is Machine Learning?

The term “Machine Learning” was coined by its inventor Arthur Samuel who described it as a part of artificial intelligence that deals with machines that are able to self-learn and don’t need expressive coding. Machine learning is used to automate work processes, engage visitors to a website, and work on repetitive tasks.

The neural network is a part of machine learning. It is a relatively new domain and a lot of experiments are being done to build neural networks that replicate the functions of the human nervous system. We are still in the beginning stages of research and application in this field and have a long way to go.

IoT and ML – A Symbiotic Relationship

An IoT network contains embedded technologies that are connected using both wired and wireless communications. One of the most important components for the development of an IoT network is data. The system should be able to access raw data from different sources and then processes it to gauge the internal and external parameters.

This where the contribution of Data Science and its subset Machine Learning becomes important. For an IoT network to work efficiently, it requires the right information, which can be collated using data science techniques and models such as neural networks, clustering methods, classification methods.

We need to explore and experiment with different ML algorithms to find precise high-volume data that can be used to gain insights for informed decision making and efficient automation.

IoT with Machine Learning – What are the future possibilities?

There are so many possibilities that we can expect to see in the future by bridging ML and IoT. Let’s take a look at a few possibilities here:

The concept of autonomous or self-driving cars has been around for quite sometime now. In fact, the first semi-autonomous car was developed by Tsukuba Mechanical Engineering Laboratory in Japan in 1977. Since then, a lot of research and development have gone into building such cars.

Now, automated cars are being developed with sonar, radar, odometry, GPS, lidar and other sensors for better navigation and vehicle control. A*STAR’s Institute for Infocomm Research (I2R) in Singapore was the first research institute to get approval for road testing of an autonomous vehicle.

As of now, the development of the connected car is still in the laboratory stage. Whether it will become a reality is something we need to wait and watch.

Compactly designed, these robotic vacuum cleaners can navigate their way around your home and vacuum it for you. They can easily reach out to those hard corners and crevices and remove dust. Originally, these robotic cleaners were designed to be operated using a remote control.

However, now they are being designed with ML algorithms to self-operate. The advantage of using robotic cleaners is that they need no supervision. The downside is that this automated appliance takes a long time to clean and also comes with a huge price tag.

The heating, ventilation and air conditioning (HVAC) system consist of all the appliances that are used to heat, cool and ventilate the space. A smart thermostat automatically adjusts the temperature of the air conditioner or heater based on the external conditions.

The system sends your connected device a notification when it’s time to replace the air filter. It also identifies possible problems in the system function and updates you regarding that.

IoT and ML not just find application in product development, but also in service management. The two technologies can be used in tandem to identify possible causes of system or hardware failure in advance and prevent them. It will help avert conditions that could cause operational problems.

Another of the sectors where IoT and ML can be applied together is in smart energy management. These technologies can be effectively used to optimize energy consumption, which can be done by building smart grids.

One of the most ambitious futuristic applications of the fusion of the two technologies is the development of Smart cities. These futuristic cities will have smart energy, smart traffic management, smart mobility, smart transportation, and smart agriculture.

Read Also: 7 Web Development Strategies To Take Your Business To The Next Level

ML algorithms such as Classification, Clustering, and anomaly detection can be used to smartly monitor and regulate traffic. Linear regression is the ML algorithm that can be used for real-time prediction of market and economics. Principal component analysis and canonical correlation analysis can be used for monitoring public places.

Data analytic techniques and tools can be used to effectively analyse data and gain insightful information. This information can be applied by ML algorithms to build self-learning machines, which can be used to build an integrated Internet of Things network.

There are numerous opportunities for research and development in the field of IoT and machine learning. The future is in Machine Learning and IoT.