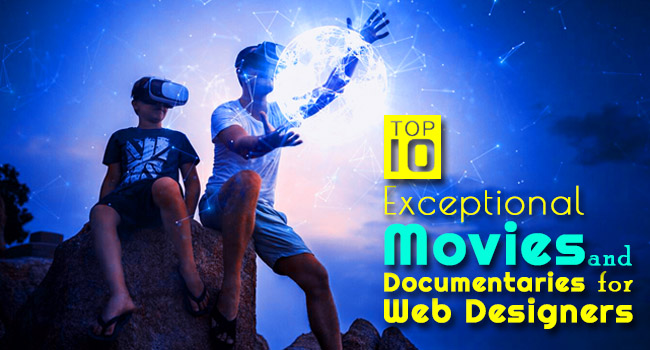 Motivation is the fuel that runs the spirit, and what better way to feel motivated than watching a movie. Holly wood is a movie industry that has explored all genres, and it has even made movies to motivate and inspire web designers.

Today we have narrowed down 10 movies that will inspire and motivate you and reignite your interest in web designing. 1. The Social Network The Social Network is a very strong film based on the world’s number one social networking website ’Facebook’.

Rather than being just a movie about a popular website, The Social Network turned out to be a smart and sophisticated drama about friendship, isolation, and difficulties of connecting to someone in this technology-driven world.

The film illustrates the foundation of a social networking website Facebook and also about the story of a young billionaire Mark Zuckerberg.

This film is worth sticking out and worth thinking about afterward. This film was also chosen as the best film of 2010 by National Board of Review. 2. Objectified Objectified is a documentary movie which examines the daily non-living objects and the people who design them.

This film might give an idea for a web designer on how the objects are designed and examined. The film portrays the creativity which is put into the work to create objects, tech gadgets, and tech designs.

The film is usually about the designers who re-examine and re-evaluate the manufactured environment every day.

The daily being of the objects shows how important is to develop and design. It can also be projected towards the technological advancement of graphic designers or web designers on how they can design and examine the environment. 3. Helvetica Helvetica is an impressive documented film which holds true at any time of the day. For anyone in design, or in digital media, this film is very much recommended.

The film tells about the history of the font ‘Helvetica’ and people who use this font will also going to enjoy watching this featured film.

The film introduces the projection of typography, graphic design, and visualization. The film accounted, how the font came up and was grasped by small and major companies.

This documented film illuminates the design of the font that we observe daily in websites, newspapers, and magazines or on TV.

Thus, this documentary will give web designers or graphic designers a brief explanation on how the font came up and how it is used in most of the digital media.

The Startup Kids is a documentary movie about young web entrepreneurs released in 2012. Creators of this wonderful docu- movie are, Vala Halldorsdottir and Sesselja Vilhjalmsdottir.

The movie has managed to brilliantly project the ups and downs of various young entrepreneurs by interviewing them.

Also, it has portrayed the struggle, planning, developing and launching of the ideas of entrepreneurs.

This movie also features founders of several popular websites like Vimeo, Dropbox, Soundcloud and much more which web designers would be very interested in watching.

Terms and Conditions May Apply is a feature documentary film which shows us how exactly the government and corporations use the information which user provides while browsing the internet.

Information which can be extracted from websites such as online shopping, installing a web application or agreeing to the terms of the browser is projected in this documentary film.

The film has exposed the erosion of the user’s private information many of us sign off on. Terms And Conditions May Apply also inspected and projected the cost of so-called ‘free services’.

People seamlessly click on the ‘I Agree’ without reading them, thus this movie illustrates what web designers shall do to maintain users online privacy and their trust.

The Virtual Revolution is also suggested for the web designers to learn more about the existence of the WWW and its impact in the world.

The film projected the impact of the World Wide Web for last 20 years when it was founded.

The film also projected the cost and risks factor affiliated with internet platforms which are commonly used by corporations such as Google, Facebook, Yahoo, or any other digital media corporations.

The movie also covered on how the private information of a user is used by various service providers and corporation.

Activities, like uploading a picture on Flickr, or using social networking sites, may seem free to be free but comes with a cost, which is exposed in this documentary.

The Curious Properties of Intuitive Web Pages by Jared M. Spool – An Event Apart Boston from Jeffrey Zeldman on Vimeo.

At an event Apart Boston 2012, The Curious Properties of Intuitive Web Pages was caught live. Jared M. Spool (the founder of User Interface Engineering) discussed the detailed logic behind the intuitive WebPages in this 60-minute long video. In this featured video, he has explained every aspect of a web page.

How users are able to accomplish their goal and know exactly what to do on the website? The web pages are created with a simple logic to please the users.

He also explained how to make a user satisfied by creating an interactive design, information structure or visual design for your WebPages.

Web designers can surely grasp these points to make a better and flexible web design for the users.

This documentary will make you dive deeper into HTML 5 with Semantic Markup. This is a great documentary for web designers and will make you feel questioning yourself   why you can’t determine the look of your site for different browsers? Or why you are letting a content author plan and put their content as per their thought? This documented movie by Karen McGrane will look closer on how web designers can adapt and create a more flexible content space. As the web process also involves content workflow thus, it needs to keep up with adaptive content and create a design which is flexible for the content.

Thinking is a documentary exploring the idea of “Design Thinking”.  It is one of the few documentaries and certainly the first about design and its impact on the world.

This documentary will grab the attention of businessman, web and graphic designers or social change maker. A good design needs good design thinking, and this movie might help web designers to bring that idea into practice.

Many great design thinkers have been featured and interviewed in this documentary and have reflected how are people changing their creative mind and applying design thinking in their businesses.

This documented movie is recommended to designers and is must-see design documentaries that you don’t want to miss.

This movie features different disruptive and smartest companies who share their perspectives and sacrifices in achieving disruptive status.

Designing has become a creative tool and the advantages of design in the competitive world have been spring up out of nowhere by many startups companies. ‘How are they doing it?’ is explained really well in this film.

In Design Disruptors, top designers of smartest companies are featured which will let you discover how design has become so important for a business.

Watching this documentary may help web designers to think deeply and create disruptive designs for the websites.