10 Times Hollywood Made You Facepalm When It Comes To Computers 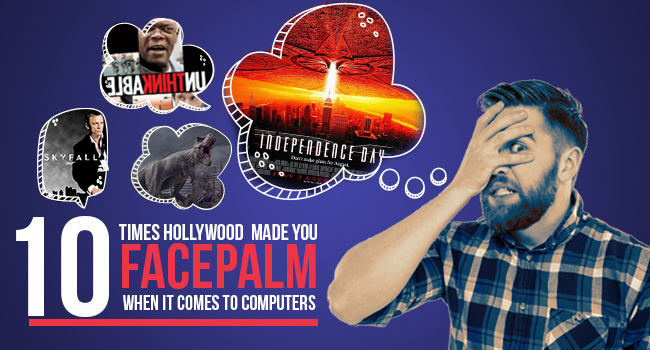 Movies, it’s indeed a vain task to search logic in it. There are movie makers who have mastered the art of make-believe with their scientific thinking and movie making skills. On the contrary, some tend to underestimate the audience and end up weaving embarrassment on screen.

The aim is to keep the audience connected and making it simple for them to digest. But Hollywood sometimes pushes the “spoon feeding” idea over the edge till it falls flat on the face.

Let’s have a look at 10 such scenes which gave the audience, especially the techies, a mega facepalm.

This is an American TV series based on crime investigation wing of the navy.

There is a scene in particular where a database being hacked. You can see two people banging the keys at the same time over the same keyboard. Apparently, they are trying to stop a malware attack happening over the network.  The tech talk is commendable but unfortunately, they forgot the fundamentals of using a keyboard.

Yet it would be pandering to the amateur audience to see a 65-year-old unplug the cable and stop the insurgency.

The CSI the American crime investigation series shows two cops staring at a screen where they find a chat between two people. Since it is in real time the third member mumbles the impossible words only to justify the job she is doing.  “I’ll create a GUI interface using Visual Basic. See if I can track an IP address.”

In short, her words might very well translate into “Il go write a code for a new program, design the software and assemble the hardware to track the location of the suspect”

Had the writer coded the lines with care, it could have saved her all the trouble.

This 1995 crime flick featuring a bunch of high school kids involved in a corporate extortion conspiracy portrays a ridiculous visualization of how the hacker’s screen looks.

A scene wherein the underlying hacking process is depicted as a virtual 3-D representation of a city and stacks of data in the form of a building like structures is a very interesting visualization until it comes to the moment when you realize it is not what you thought.

The hacker is actually navigating through the 3-D structures in real-time over his screen using the keyboard. As long as you can wrap your brain around the kind of user interface they are using to cruise through the fascinating data structures, let us stick to command prompt.

A bond movie with another faulty montage on-screen scene.

They are trying to gain access to the hacker’s code which is repeatedly mutating itself.

The visualization of how the user interface accepts the input provided by the programmer and generates a subterranean channel of tubes in the city is far from the kind of images the GUI is capable of producing in reality.

But again the Hollywood motto is mainly to keep the audience in the loop.

In a 1997 released action comedy, a kid plays a game which lets him hack into a corporate space which apparently looks like a dungeon.

And how will the kid gain access? By finding a valid entry into the animated castle as a hacker who has two minutes to complete the task through a commotion of skeletons and warnings of federal prosecution in case of failure.

The pressure dial up in the scene is what really gets you. But the glitch here is the access would not be declined once he is identified as an intruder.  In fact, a good two minutes are spared for him to breach further.  The game fairly tries to track the location but surprisingly updates every detail of it to the hacker which is a complete put off in comparison to some real comeback against hacking.

A crime thriller released in 2006 in which Harrison Ford wants to pick account numbers from a computer monitor. This is a major hardware hacking blunder wherein he takes an iPod and plugs it into an age-old fax scanner head. The iPod obviously does not have a complimentary slot to connect to the scanner.

He might have just exaggerated on the ability of the iPod to thinking of it as something more than a storage device.

In this 1993 sci-fi adventure, a character tries to restart the access control of the facility to lock the control room’s doors.

The movie actually used an experimental application to view a building locking system in 3D. A section of audience perceived the idea as unrealistic and misinterpretation of computer visualization similar to the glitch in the movie Hackers.

But this, in reality, was a file manager program system developed by the SGI back in time which never made it to a fully functional software. The idea gained popularity through this very movie itself.

What we are looking at is a multi-city nuclear insurgency. The person who planted the bombs is likely to spill the beans. The FBI eventually succeeds in tracing the locations and disposing the bombs.

But the technique they use is actually unthinkable. A member of the squad uses Microsoft excel sheet to reset the timer and prevent the bomb from going off.

They justified the title. What more could you ask for?

An exaggerated crack of a hack!

The investigators come across two hackers conversing over an internet chat protocol.

The chat relay system is used by a bazillion people across the globe for communication over the internet.  But the way the cop tries to explain it, only makes it seem harder than it actually is.  The over the top explanation about boats and drug dealers just confuses the audience for no reason.

The planet is under an alien attack.

The scientist terminates the invasion by uploading a virus in the extraterrestrial computer and blows up the mothership.  All this from a laptop created on earth by humans and within a timeframe you could cross a track of hurdle race with no hurdles. The pace is impressive until it strikes you that the technology he just disrupted is actually an alien operating system with a totally different structure than the binary codes of Microsoft.

So how exactly did he penetrate the system in the first place? Unless the alien ship had the same core technology to run their OS as ours,  the situation could easily drive any genius at his wit’s end.

The point is hacking, in reality, is not as exciting as the movies make it. An average person calmly staring at the screen with boring codes crawling over the screen would not take the audience at the edge of their seats.

But when you see a suave and young geek, shouting insane techie jargon and the screen flashing “decryption complete” at the last second of the ticking timer, it works wonders.

That was just another clichéd screenplay of a high voltage computer hacking scene followed by Hollywood filmmakers.

Which is your favorite Hollywood hacking facepalm moment? Do let us know in comments.