Searching For Hacking Related Movies? Check These 30 Movies Out 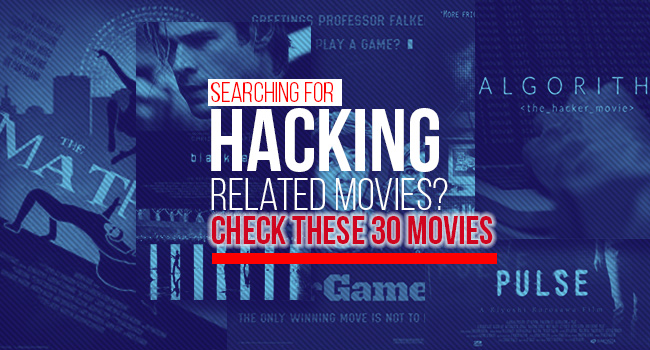 In the past few decades, many hacking-related movies have been produced. While most of them are about robbery or mystery, some are sci-fi and romantic giving a new twist to the topic. Though hacking related movies might not have too much action, there’s a different kind of thrill in them that will surely amuse online security and hacking enthusiasts.

In this thrillers, hackers break into the Chinese nuclear power plant to launch a nuclear reaction and into the stock exchange to steal millions of dollars.

This is the story of a high school hacker who by mistake hacks into a military supercomputer and starts World War III countdown.

A hacking genius hacks into a mysterious signal and unleashes the evil world causing havoc around him. This movie is a sci-fi thriller and is very innovative, so if you are planning to watch a movie with friends, this one should be your choice.

After breaking into a top secret government contractor’s computer, a freelance hacker he downloads all recently created software.

The Matrix is undoubtedly the all-time most significant sci-fi movie. A hacker realizes that the world is entirely simulated and therefore, hacks into the machine to make people know it.

In this movie, Lyle is a famous hacker from an esteemed thieves group who manipulates traffic lights and other devices to make the theft a success.

This is a real-life story of Tsutomu Shimomura, a famous hacker during the 1980s and 1990s who now is an established author, speaker, and IT security consultant.

In this movie, a hacker breaks into the US infrastructure to transfer trillions of dollars into his bank account.

Untraceable is a thriller movie in which a killer kills his victims based on the number of hits he gets on his website, KillWithMe.com.

This movie is based on the infamous book called The Snowden Files: The Inside Story of the World’s Most Wanted Man and is a much watch for everyone.

Julian Assange, a hacker, breaks into many systems including Citibank, Pentagon, and NASA.

A man’s family turns bankrupt, so he uses his hacking skills to steal from the bank he protects to pay off the debts.

After a traumatic event, a female hacker wakes up to find a phone glued to her right hand with a countdown timer set. What happens next?

To get away from her boring life, a teenager joins Nerve, an online game that gives dares and slowly takes over her life.

The lead actor has a perfect life, but then he finds out that his teenage daughter is being stalked by a hacker and nowhere around is safe.

In this movie, it is shown how the police try to cope up with hackers but fail every single time.

It is a wonderful movie if you want to know more about hacking as it revolves around a group of hackers who want to become famous.

Swordfish will take you on a journey of how hackers break into a bank system and take away all the money.

Mr. Robot is a television series in which an anxious software engineer is hired by a person to break into a huge company.

20. The Girl with the Dragon Tattoo

This movie goes into the technicality of hacking and surrounds the life of a hacker and a troubled investigator.

Sneakers is a real deal as it shows how government agencies treat hackers after they are found guilty and the risk that comes along with this profession.

A mysterious package arrives at the doorsteps of a young computer engineer, and he goes on a mission to discover what it is.

A hacker plans to retire after gaining a lot of wealth from his ill-doings, but he is asked to steal for one more time.

Hacking is a tiny part of the movie, but the entire plot revolves around it in this comedy movie.

After landing his dream job, a man learns about the dark truth of the software company he is working at.

Code Hunter is one of the best hacking movies. In the film, America’s top hacker is pulled into a cyber-terror, and the person behind it steals his identity. He then puts it in the US Most Wanted List and threatens him to cooperate or else he will get the hacker arrested.

A female engineer and her friend start a quest to destroy the entire US monetary system after they find how to crack into ATMs.

In this animated movie, you will find two people search for the most mysterious hacker in the world, who goes by the name – Puppet Master.

This 1998 movie takes you through the real-life struggle of a young group of hackers living in Hannover, Germany. It is set in the 1980s and tracks the life of Karl Koch.

The lead actor, who is a hacker, lives a straightforward life out of the hacking world. Then he decides to hack into the most challenging domain called the Stoiser domain but is unsuccessful. Scared that he would be punished, the hacker finds him in surprise after Stoiser, a domain’s owner offers him a job – webmaster.

The weekend is soon approaching, which means you have a great chance to go on a hacking-related movies binge watch with some soda and popcorn. Invite your friends over and host a movie party at your home.

Previous 20 Movies That Can Inspire You To Be A Programmer – Infographic
Next Killer Features Of Odoo 11 – How Beneficial Are They?