How to integrate Python and HTML in different ways? 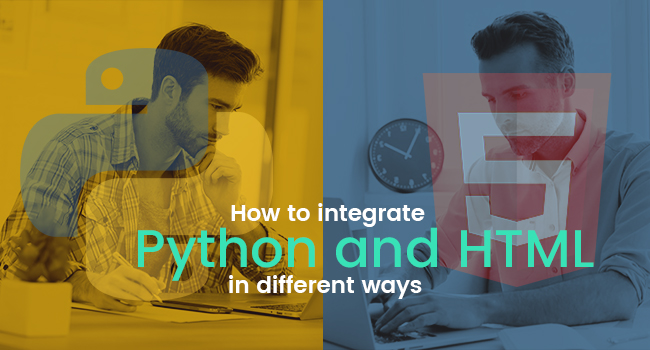 The web application is slowly but gradually spreading all over the internet world and is slowly turning out to be the new face of businesses. Initially, Hypertext Mark-up Language (HTML) was used for the process of web development. Well, that changed with the introduction of many platforms which made the process easier. However, the use of HTML in web development never ceased.

Let’s see how Python and HTML dependant on each other.

The user makes a request with the server when they enter any website. The server will search for the particular request and will revert the answer to the browser that will display it to the user known as a response. Well, this is a common way in which HTTP works for the user. However, dynamic websites have a different way to work as they depend on the programs to fulfill their request and generate the solution for the user. This includes many things such as showing email, posting bulletin board, software configuring, and displaying time.

Since there are many servers that support python, hence these codes are usually written on that platform only for the dynamic sites. Subsequently, HTML use C, C++ which make python execution difficult. A developer needs to create a bridge like structure between the two to help in easy interactions. Also, it is important to know that interfaces can be rejected by the server. The only newer server can easily support the change without much problem.

It is the oldest and most supported interfaced used by web servers. CGI is used to make a request to the server and since the server started the python interpreter, the load situations seem to go out of hand. The python takes some time to load off the content and get started to work. The best thing is that Python with CGI only needs a total of three line of code (LOC) to bridge the gap. Well, it doesn’t help much to the developer. However, you don’t have to write CGI programs. However, you can use the simple CGI code to get started with:


Save the code as per your configuration with the extension – .py or .cgi. Also, you need to save the file in the folder named as cgi-bin for security.The cgitbwill allow displayingtraceback instead of crashing the request or“Internal server error”. However, it can risk in reliving important data during debugging. If you are using production code then avoid using cgitb. There are other methods like exceptions that could be used.

People that are from the PHP or JS background usually find it difficult to understand python. To overcome this, they simply use mod_python as it is similar to mod_php. Well, there are many things that make them different. mod_python is used to embed the translator in a process and speed the request process without calling out the interpreter of python to load. However, it cannot be used with Python incorporation with HTML, the same way it might work with PHP with HTML.

As a matter of fact, it can create extra problems in the code. However, it can imitate CGI to work in the python server page which has a publisher to select a file to receive requests. But, python interpreter depends on cache for the file execution. If a file is changed then you need to restart the server. Another issue that might be faced by using mod_python is that a child process is used to receive and handle the request which needs the whole interpreter to load at once all over again. This results in slowing down the server. In some cases, it is better to use mod_python like in the WSGI programs.

With the help of mod_wsgi, you can easily get rid of the low-level gateways. However, WSGI applications are usually deployed with the help of mod_python, SUGI, and FastCGI. WSGI applications were directly embedded in the Apache server by using mod_wsgi that is precisely planned as per the host. This helps in deployment making it easier than any other methods. Also, you won’t need glue code if you are using it. However, it may limit the server.

The WSGI server is the code that connects the gateways such as mod_python and CGI. The most commonly used server is flup supported by SCGI and FastCGI including AJP. The server is written in the python language but also be translated to another platform including C to use as a replacement method. The main advantage python has over other is that it can be deployed on nearly any platform.

There are few libraries that made it possible to mix python and HTML together. However, it is easy but it can be difficult to maintain and hence you will require templates. They are like the placeholders for the HTML files.

In order to generate HTML with a complex solution that is based on model data, looping constructs or conditional like python if and forwill be needed. However, it is well supported by the template engines.

Templates are available as per user requirement without or with the framework. If you are looking for learning purpose then you can adopt plain text programmingand other most popular is XML.

There are many frameworks available in the market that is extremely used by the developers. You can select any one of them as per your requirement and server techniques. It is simply a way to save money, time and enhance the rate of production.

Previous How To Build Your Own Online Store Using Prestashop
Next 15 Reasons Why Your Business Needs a Website ASAP!