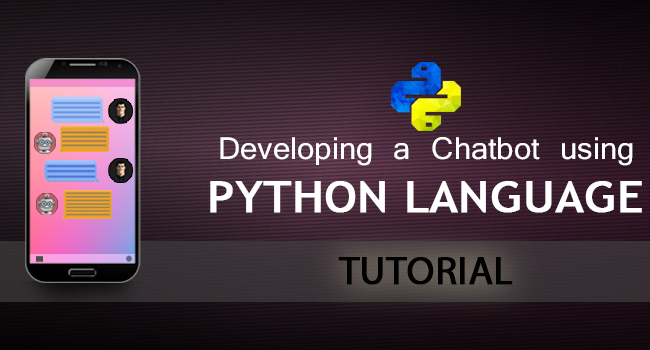 Hands up, If you want to learn how to build an AI Chatbot with Python. This article will walk you through using a Python language library to develop a simple chatbot that determines the value and responds to user input.

Before we get started, there are some points which you need to know before creating artificial intelligence using Python.

What Other Languages Are Used For Building AI?

One of the most known languages for creating AI is LISP (an acronym for list processing).  Its key features consist of, dynamic typing, garbage collection, interactive environment, and uniform syntax. The codes written in LISP are s-expressions which consist of lists.

Prolog is also one of the most popular AI programming languages. It has a built-in unifier, which makes it different from others. The main drawback of this language is that it is very difficult to learn. Therefore, people have to think twice before actually going for it. Another language which is best suitable, if you want to build a simple AI in a short period of time is C/C++.  Its portability and built-in types make this language a priority choice for some developers.

Last but not the least, we introduce you Python. It’s quite similar to Lisp and is one of the most popular languages amongst the other AI languages. But what makes it so popular? Let’s find out.

Why People Opt For Python?

Python has a clean grammar and syntax; it is natural and fluent, explicit than implicit. It has a playful approach to many tutorials and other materials.

Python offers some really efficient features such as, thought out syntax, language interoperability, holistic design, low-level and high-level programming, documentation generation system, testing frameworks and numerous libraries, which are often enjoyed by the developers. When compared to other OOP (Object Oriented Programming) languages Python is comparatively much easier to learn.

Proceeding on Towards Building AI Based Chatbot Using Python

Building AI using Python is time-consuming. In fact, it certainly depends on your motivation, skills and the level of experience in programming.  You must have a basic understanding of this language, in order to build AI with Python. First of all, install Python. You may do that installing Anaconda or any other open source analytics platform. The next step is to gain knowledge of machine learning. I understand that it’s quite impossible to reach the ultimate understanding of machine learning in such a short period of time. Hence, start with basic knowledge.

Python libraries are very useful when you build AI. Pandas, an open source library that provides developers with convenient data structures analytic tools is another important tool for Python. Scikit-learn is an efficient tool for data analysis. It is amongst the most popular general purpose machine learning library.

After working with scikit-learn, explore k-means clustering. To learn more about Python in AI, you can read about a deep learning framework caffee and a Python library Theano.

By above paragraphs, it can be concluded that Python is quite important for AI. Any machine learning project can take benefit from using Python. AI indeed demands a lot of research. Use of Python in AI makes its programming efficient like no other.

How To Develop a Chatbot Using Python?

A chatbot is a computer program, which is designed to simulate a conversation with human users, especially over the internet. They are online assistants that offer different services through chatting. For example, there is Lyft whom you can request a ride via chat (Facebook Messenger and Slack) or voice (Amazon Echo) or Starbucks with which you can easily place an order using voice commands or text messaging. Cool right?

A chatbot can be used in any department, business and every environment. They are artificial narrow intelligence (ANI). Thus, are not as clever as humans. Additionally, chatbots only carry out a limited amount of task i.e. as per their design. However, these chatbots make our lives easier and convenient.

The trend of Chatbots is growing rapidly between businesses and entrepreneurs, and are willing to bring chatbots to their sites. There are various ways to do that such as by using different languages and approach or you may ask a professional software development company to do that for you. You might also create it yourself using Python.

First, create a standard startup file without any pattern and load aiml b. Add random responses that would make a dialogue interesting.

Now, to code your own AIML files, look for some files which are available beforehand. For example, browse among files from the Alice Bot website.

The startup file you will be creating will act as a separate entity. As a result of which, you will have more AIML files without a source code modification.  The program will start running when there are enough AIML files.  This was an introduction to how to make AI using Python. Now, let’s proceed further and see which particular library can be implemented for building a Chatbot.

Nowadays, Natural Language Processing or to be precise, its component Language Understanding (NLU) has allowed bots to possess a greater understanding of language and context.

They are advancing at an unprecedented rate and are becoming more intelligent in understanding the meaning of the search. They are now capable of responding in a more specific, accurate and context-based information.

Social media platforms such as Facebook Messenger, WhatsApp, Slack etc. are progressively being used by businesses.  Websites-interface is being replaced by Bots. From the numerous choices available for building a chatbot, the implementation below uses the RASA-NLU in Python.

How To Install RASA?

Rasa can be installed on a standalone machine. Steps are as follows:

RASA-NLU is made up of separate components, where here every component does its own specific work. Each component has its own province. Options such as MITIE, Spacy, and Skelearn are available. We will be using Spacy and Sklearn here.

Flask is simple to code. Use pip install flask and follow along to understand the basics of the framework.

A RASA-NLU platform needs to be practiced before actually initiating it. We must transfer few sentences and mention the intents and entities in it. For those who don’t know, Intents are sentences that contain actions and categories, and entities are compulsory variables required to fulfill the actions.

Below is a simple example, showing that it contains many entries: 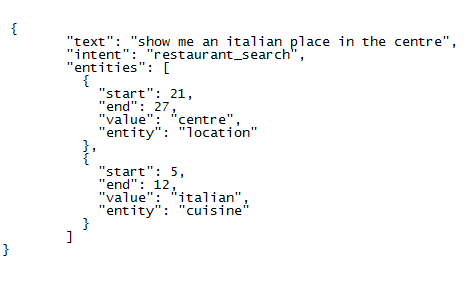 The explanation is as stated below:

This will create a model_YYYYMMDD-HHMMSS folder.

GST Bot is just a small example, revealing the potential to develop something which is completely functional and useful.

Previous 7 Kick-ass Games Built Using Python Language
Next Worried About Domain Name of Your Website? All You Need to Know