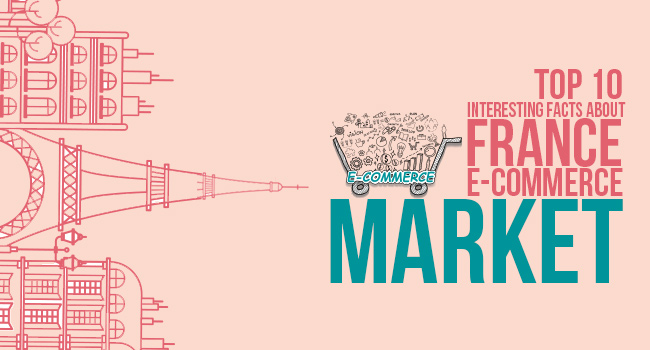 In 2014, e-commerce market of France was 74 billion Euros. This year (2017) it is expected that the overall online market might touch 86 billion.

This jaw-dropping rise is the reason why France has been named as 3rd largest e-commerce market in Europe and 6th largest in the world.

As the number suggests there has been a rapid increase in online sales in France in the past few years. In 2014 around 37 million French people went online for purchasing and now it’s 66 million (87% of the population of France).

So what are the specialties of such a huge online market? Let’s have a look 1.It’s insanely huge!

As mentioned above the e-commerce marker of France is booming, after all it’s the 3rd biggest in Europe and 6th in the world. There are around 200,000 active online stores in France. Around 66 million French people went online shopping through their smartphones.  Among the huge online store list 80% of the sellers have mobile-based version of their state.

2.M-commerce revenue is on a steep rise

In 2016 there was a 34.2% increase in the m-commerce market in France and it is estimated that 25% of the entire online sales in France will be taken over by mobile platforms by the end of 2017. In the case of the choice of devices smart phones is their favourite. It is expected that by 2020 the m-commerce revenue of France will be USD 17.5 Billion.

3.France, the Mecca of Fashion is changing

The fashion industry has always revolved around France. When it comes to fashion, France has always been the benchmark. However, a recent survey revealed that there is a rise in online purchase and around 28% of people who participated in the survey said that they are now frequently purchasing clothes online rather than a ready-to-wear chain. Even though most of the people in France prefer to buy clothes, accessories, and shoes through face to face deal now, statistics are indicating that there is a huge wave of change happening. The increase in the percentage of people willing to shop online is indeed positive.

It is indeed true that e-commerce market in France is crowded. Since the completion is tough new business owners who wish to sell their products online should develop new, innovative strategies.

Meryl Job and Renaud Guillerm two entrepreneur first developed an online fashion community and started sharing and discussing fashion. He developed the platform to a huge online fashion enthusiastic community and Later on the situation was monetized by creating a website so that community members can buy as well as propagate the commodities.

French People are very much particular about their language. So it is less likely that poorly translated language in websites will succeed in France.

A recent survey revealed that 70% of the French e-commerce customers wish to see their preferred search results to be on the first page itself. So the only solution here for non-eu citizen web-developers is to install the best language translation plug-in possible and optimize the website in accordance with search engines.

Carte Bancaire has their strong foothold in France owing to their flawless payment system. Majority of the people (e-commerce customers) depends on Carte Bancaire. However, there are other payment methods available too. Payment methods like Atos, CM-CIC, Paybox, Stripe, Ingenico, SagePay, Authorize.net, Skrill etc.(card based) and Paypal etc. are catching up in France.

In France, lion share of the merchants are small scale and a fully fledged e-commerce website is not at all economically viable for them. So there are e-commerce solutions which can build as well as maintain websites affordable rate which will cater all their basic sales need.

For instance, Prestashop is one of the famous e-commerce platforms which French merchants rely on. There are around 30,000 plus Prestashop users in France alone. Apart from Prestashop, merchants also rely on, Shopify, Magento, Bog Commerce, Yokart etc.

8.Most of the websites offer free shipping

The power of offering something free can create wonders for merchants. For example Amazon the e-commerce giant when entered the European market, especially France faced a huge backlash owing to their shipping charge. The sales took off when they introduced free shipping. This is the exact example now sellers are following in France at the moment.

9.Customer has to pay EU tax

A customer or an importer is bound to pay VAT/import tax/excise duty if they have to purchase goods. Tax rate of France is similar to that of many European countries.

10.Remember! They are in plenty

France e-commerce market is overcrowded. More than a dozen websites are getting launched every week. E-bay, Amazon etc have also their foothold in the market. Innovative digital marketing is the only way to thrive in the crowded market.