End of Net Neutrality! Will it Destroy Ecommerce Market? 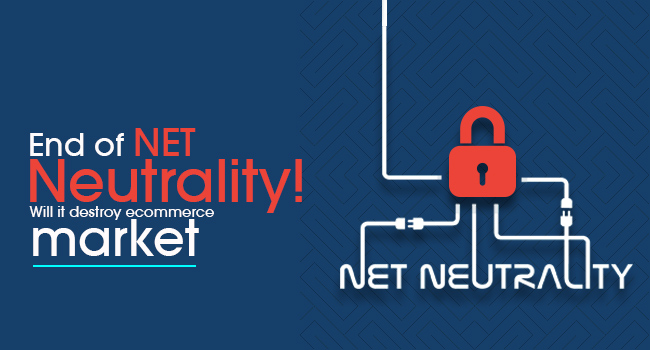 FCC (Federal Communication Commission) has voted to repeal Obama’s net neutrality rules. This hasty decision has opened up a Pandora’s Box in the internet world.

Ajit Pai the main behind the repeal has been opposing the net neutrality which promised equality in providing content to the users for quite some time. He has stated on many occasions that the whole net neutrality scene is created with hypothetical harms and hysterical prophecies of doom.

Is it really out of hysteria? will it have any impact on the way we experience internet?

Experts are saying that ISP (Internet Service Providers) are now being awarded power to pick winners are losers on the internet and it’s going to change the way users access the internet.

Another worry is that this draconian law, if spread all over the world, will put an end to the way we shop or even cause irreversible damage to the online shopping industry?

It’s been raining news about the whole issue. People are carrying over discussion, protests, spreading internet memes in Facebook and Twitter, comedy videos etc about the decision of FCC.

The latest video by The juice media is one such video in which they clearly explained that the murder of net neutrality is preposterous.

Last Week Tonight the famous American Television program did a special show on the issue and did a great job explaining the whole situation.

The world is furious, Business sector especially e-commerce sector is petrified and raged regarding the issue.

Let’s have a look at the negative impact that’s going to have in the online retail industry. If the draconian law dismantles net neutrality.

Will it be the end of online stores?

Imagine that an ISP is preventing a user from entering an online store and on the other hand faster loading is being provided on another website.

Won’t it be the end of the online stores that’s been slowed due to whatever reason it might be?

Even though the example sounds a bit overdramatic it is indeed a possibility. Imagine that every ISP’s in the world is following the path of profit, which they can easily get hold of if there is no net neutrality.

Numerous News has come out earlier that Donald Trump in his initial days of his being president of USA  had a detailed discussion with FCC regarding the access to various content to common people.

The question here is, will this act be an example for governments across the world? If it does, it would be devastating.

Big names in the internet world like Google and Amazon have always given impressions that they support net neutrality. In reality, the picture is exact opposite according to recent reports. Google has blocked Amazon from advertising certain content through YouTube. If this has happened for real isn’t it hypocrisy at its best?

Another prime example of the situation is that. Netflix records 34% of the internet usage during the prime time (7-11pm) and reports are coming in that the new law if in practice will force Netflix to share their revenue owing to the huge loss of other websites during this peak time.

The net neutrality supporting camp is stating that during big sales time like Xmas, Black Friday, weekends etc. bigger retailers would pay their ISP’s and would channel the traffic to their website causing devastation to small retailers all over the globe.

Since studies have proven that 1 second of delay time will affect 7% of the conversion rate of a website. Small websites will have to face worse situations in their business.

Freemium marketing will also be affected drastically. If channeling of internet traffic happens. This freeemium (trial version of the software in which companies allow users to use their certain features for free) version has to be made payable to cover up the loss.

But, experts are saying that there is no need to panic for now as all these scenarios are hypothesis and nobody knows what ISP’s will do if net neutrality is taken off.

On the contrary, that’s the exact reason for the panic right now. What will happen if power is given to ISP’s are unknown. All we can do now is to cross our fingers and hope for the best to happen to the booming online market all over the world.