Benchmarking Performance of Python & Java: Which Is Faster? 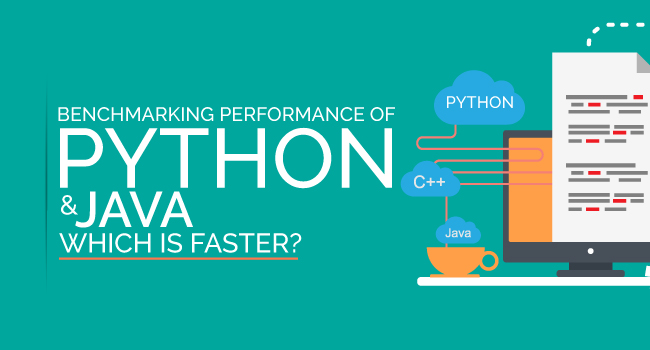 Java, one of the most renowned has long been the fore-runner among scripting languages due to its versatility such as cross-platform compatibility (Compiled Java program on platforms that has JVM).

However, Python has launched a serious offense against Java in recent years. In fact, the use of python as a scripting language is increasing by leaps and bounds. In such a scenario it is important for programmers to benchmark the performance of Java against Python or vice versa to get a clear understanding of which language to use.

Let us pit one language against the other in terms of parameters of productivity and see who has the edge in today’s application development scenario.

Java is statically typed whereas Python is dynamically typed. The problem with static typing is that all variable names need to be declared along with their types. This is because the Java container holds objects in the generic type. It is also because of this reason that when you would save an object from the Java container, it would not remember its type.

So the variable must be explicitly cast to the desired type. If you assign the wrong type to the certain variable the language will trigger a type exception. In terms of productivity of the application developer, this is a negative aspect.

Python, being a dynamically typed language, has done away with the pitfalls of a statically typed language. The Python containers can hold objects of any kind. So, when you save an object from the container it remembers its type. If you are using Python you need not declare any variable. The assignment statement automatically binds a type to an object, irrespective of its inherent type. Moreover, if a name is assigned to an object of one type, the same may be assigned to an object of a different type. This makes it easy and fast on the part of programmers to write codes. Long Codes Versus Short Codes

Codes written in Java are longer whereas Python can express the same in shorter codes. Longer codes not only take more time to write but are also prone to error. The longer the code the more are the chances of bugs. So coding in Python is less time consuming than coding in Java.

Java is a clear winner in this aspect. Scripts written in Java in one platform are portable to and compatible with many other platforms. Java code written for Windows is portable for android etc. This is because of the Java virtual machine. You have JVM in a platform and JavaScript will run there.

You need to put in extra time and effort to update and maintain a Java codebase. On the other hand, Python emphasizes on the generation of reusable and readable codes. This saves a lot of time for the developer.

Choosing Python or Java isn’t the biggest decision here. Both carry their benefits and drawbacks. However, for a particular project, one is certainly best than the latter. Most of the time, small and medium projects are better going with Python. However, larger projects need Java.

Previous The Most Secure Web Programming Language – is there any?
Next Python is the Industry’s Most Preferred Language. Know Why?