15 Movies Programmers Should Not Miss At Any Cost 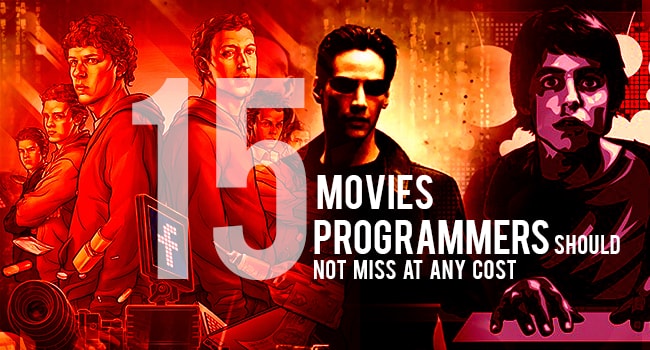 Programming is an art and it needs good dedication and time to explore the world of innovations. But once you get through, it seems like a world of imagination and instincts that can work wonders. There are many awesome movies that portray the possibilities of programming and technology. Brilliant directors connect certain ideas to give us a world of entertainment, education as well as inspiration. Just like books, some amazing movies can make a magical impact to some people. We have heard stories of people whose life has transformed amazingly with the inspiration they got from movies.

When choosing movies, everybody will have their special taste. When it comes to movies for programmers, they would mostly love to see screen plays that use the most updated technology or the real life stories of their programming heroes. Here is a short list of some movies which is highly recommended for an aspiring programmer.

This is an awesome movie which every programmer would love to watch despite time. The Matrix is a science fiction action film that hit the screens in the year 1999. This was one of the first movies in which the idea of “hackers” was highlighted in the mainstream. This movie inspired many youngsters of the time to learn more about computers and programming. The programming enthusiasts can see that the concepts of recursion and loop are executed brilliantly in this movie. It was directed and penned by The Wachowski Brothers.

This is a 2010 American movie that has occupied one of the top spots in the all time favourite movies of programmers. The Social Network fictionally depicts the origin of Facebook and the muddle of lawsuits that were to be faced. With eight nominations, the movie was a hit at the Oscars. The movie admirers would love to see the life journey of the founder of Facebook, Mark Zuckerberg. The introduction of this social media application was a sensation of the period and the movie also got enough appreciation for its brilliant screen play, editing and direction.

This is an American Cold War science fiction movie that was released back in the year 1983 under the direction of John Badham. In one word, movie lovers will describe WarGames as ‘classic’ which screened the story of an 80’s kid hacker. The movie shows how the kid accidentally accessed WOPR (War Operation Plan Response) thinking it was a game and the after effects. Some experts also saw this movie as a message to parents and teachers to have an eye on the kids to avoid misuse of the possibilities of programming.

This 2000 movie portrays the story of a computer hacker, Kevin Mitnick which took the plot from the book ‘Takedown’ written by John Markoff and Tsutomu Shimomura. As he is the topmost hacker globally, programmers would love to watch Takedown to see how he uses or misuses the programming possibilities to challenge the world. Skeet Ulrich and Russell Wong played key roles in the movie and it was directed by Joe Chappelle.

It is an amazing science fiction thriller that hit the screens in the year 2011. Source Code is a kind of movie that keeps you exciting throughout the run which is intellectually stimulating and connects you emotionally, as well. The movie takes you to an interesting plot of tracking Chicago commuter train bomber with a top secret operation. You can see an amazing mysterious trail when the hero enters another person’s body in the journey. The movie was directed by Duncan Jones and penned by Ben Ripley. The key role was handled brilliantly by Jake Gyllenhaal.

This American drama film that hit the screens in the year 1999 came under the direction of Martyn Burke. A true programming enthusiast would definitely spend some time to watch Pirates of Silicon Valley as it shows the journey of developing the personal computer while exploring the competition between Jobs and Gates. The incidents that happened throughout the year span of 1971–1997 are depicted in the picture when finally Apple and Microsoft announced an alliance.

This is a 2001 thriller film from the pen of Howard Franklin that tells the story of young idealistic programmers. The plot of Antitrust is a large corporation which is a dream land for any programmer which offers creative opportunities in an informal working environment. The movie showcases how a young programmer found out some hidden truth behind the organization and brought some anti-trust problems to limelight.

This is an amazing American historical drama film that was released in 2014. Programmers would find watching The Imitation Game really interesting as it portrays the journey of inventing world’s first computer. You can see the struggles of Alan Turing and team in the process which eventually decodes the prominent German Enigma code. Historians praise this invention for making the war shorter and saving many lives. It was written by Graham Moore and directed by Morten Tyldum.

This biographical thriller film hit the screens in the year 2013 under the direction of Bill Condon. The Fifth Estate portrays the incidents and controversies that paved the way for WikiLeaks. Programmers would be excited to know about how the internet activists set a platform to misuse the programming possibilities to anonymously leak important data from corporate crimes and government. The movie inspired the plot from some famous books on wikileaks.

This is an American biographical drama film which was released in the year 2013 based on the life of Steve Jobs, the man who took Apple company to next level. The movie Jobs portrays important incidents in his life right from his college to the finding of the Apple iPod. He is such an inspiration for the young programmers and this movie can really do a lot in impressing the folks. It was penned by Matt Whiteley and came under the direction of Joshua Michael Stern.

This 2004 American movie portrays the unintentional discovery of time travel. The experts evaluate that the movie Primer is made exclusively for engineers and not for an average audience. That is why it holds a special position in the list of movies for programmers. It runs an experimental plot structure which depicts the story of a strong comeback of two hardware engineers into the pinnacle. The inspiration from the movie is good enough for any apathetic engineer to give it a try with the programming possibilities.

This is a 1995 American crime film based on the plot of a set of high school hackers and their role in the conspiracy of corporate extortion. The Hackers hit the screens when the idea of internet was not that popular and what the movie showed seemed a mystery to many. This movie was directed by Iain Softley and penned by Rafael Moreu.

This is a 1999 American comedy film that deserves a spot in the list of most loved movies by programmers. In Office Space, the work life of a typical software company in the late 1990s is portrayed in a fun space. The movie was inspired by Judge’s Milton cartoon series. Even when the movie was not a big success in the box office, it won many hearts, especially that of programmers whose life was portrayed beautifully.

This is a really interesting American science fiction action-adventure film that was released long back in the year 1982. The plot of Tron is really amazing to watch, especially for programmers as it portrays the story of a computer programmer who got zapped into the computer world. Considering the time the movie was released, the effects that was used throughout the film deserves applause. The interesting plot shows how he interacts with programs in order to escape from that world.

This is a science fiction psychological thriller that hit the screens in 2015. The Ex Machina runs around an interesting plot of artificial intelligence and the fictional discovery of “strong AI”. This discovery was something which people would love to have, as it lets you know whether the person in front actually likes you or is faking it. A breathtaking cinematography is what made this movie an awesome one. The movie showcases the brilliance of software developers in creating beauty and meaning to the world around us while giving a caution of handling it properly.

From the movies listed above which one has influenced you the most as a programmer? Comment below and let us know.