Why Future of Python Language is Bright? 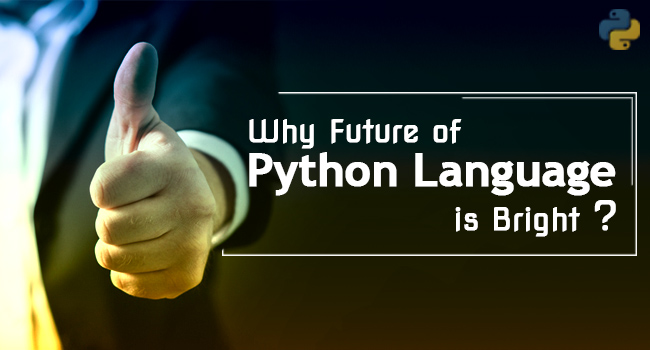 It was designed by Guido Van Rossum who was a Dutch programmer. It is one of the most favored programming languages used worldwide.

It has undergone more than 25 years of the successful span and it is one of the fastest growing programming languages. Python itself reveals its success story and a promising future ahead.

Why has Python become more popular?

Python has gained more popularity than ever. Python provides significant features which catch every programmer’s attention.

Python is very simple to read and write hence, it reduces the confusion among the programmers.

Surprisingly, one of the biggest tech company Google uses Python for their numerous applications and has a full devoted portal to Python.

Here are some features of Python that can project the reasons why it has become so popular.

1. Python Has A Rich And Supportive Community

Most of the other programming languages have supports issues. Also, some of them lack in the documentation which makes it difficult for a programmer to build his project.

Python doesn’t have these issues. It has been around for a long time, so there are plenty of documentation, tutorials, guides and much more to help a programmer.

Also, it has an active and rich community who ensures to provide help and supports to the developers. The community consists of many experienced developers and programmer who provides support at any time.

2. Easy To Code And Write

Python has a simple and readable code as compared to other programming languages like Java, C or C++. The code is expressed in an easy manner which can be simply interpreted even by a beginner programmer.

Although to master Python programming, it will require a lot of effort and time, but to learn this language from scratch is easy for a novice. Even looking at the code he can tell what the code is supposed to do.

Python is an open-source programming language that means its source code is publically available.

You can either modify or use its code directly.

It is freely available and you can download it using this link https://www.Python.org/downloads/ you can start with the Python by simply installing it.

Python comes with a huge standard library. These libraries eliminate the effort to write a function or code.

The library consists of many inbuilt functions and pre-written codes, so you don’t have to write a code for every single thing.

Python can run smoothly on different operating systems such as Windows, Linux, Ubuntu, etc. so it can be interpreted that it is a portable language.

That means if you’ve written your code for the Windows platform, you can also run it on a Mac platform.

There would be no need to make changes to your code to run it on any other platform.

With many different programming languages available, Python has tremendously outraced the other languages.

Career opportunities associated with Python have also grown significantly as its popularity has increased by 40%.

Many IT businesses are looking for more candidates with experience and skills in Python programming languages.

This has illustrated the better career scope for the Python programmers in the near future.

Here is the list of the Job profiles for the Python programmers with their salary respectively.

A recent job search has shown, over 40,000 Python jobs were inquired in the USA.

Also, the Data on the Stack Overflow has shown that the Python was the most visited tag across in US and UK.

One of the major reasons for a good career opportunity is the combination of Python language and Data Science.

Not only small companies but even top companies are using Python as their business application development.

Even the Central Intelligence Agency (CIA) is using Python to maintain their websites. We have listed a few top companies which are continuous deploying Python’s application in their organizations. 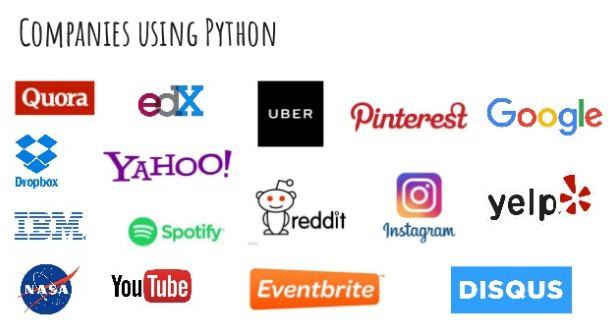 Google: Google’s first search engine and the entire stack were written in Python. It was developed in the late 90s which uses old-school They still use Python extensively.

Nokia: Nokia which is a Finnish company is a popular telecommunication industry. It uses Python for its platform such as S60.

Walt Disney Feature Animation: This animation studio uses Python as a scripting language for their animations.

Yahoo! Maps: It is a map developed by Yahoo! and many of its services are also written in Python.

Websites based on Python

Disqus: Disqus is a commenting forum and the entire forum uses the Django Django is a web development tool written in Python.

Dropbox: The entire stack of Dropbox was written in Python.

Quora: Quora is a popular social commenting websites which is also written in Python.

This has clearly shown that most of the biggest MNCs use Python programming language in their applications. Thus it has a vast scope in the future.

There are so many applications of Python in the real world. But over time we’ve seen that there are three main applications for Python 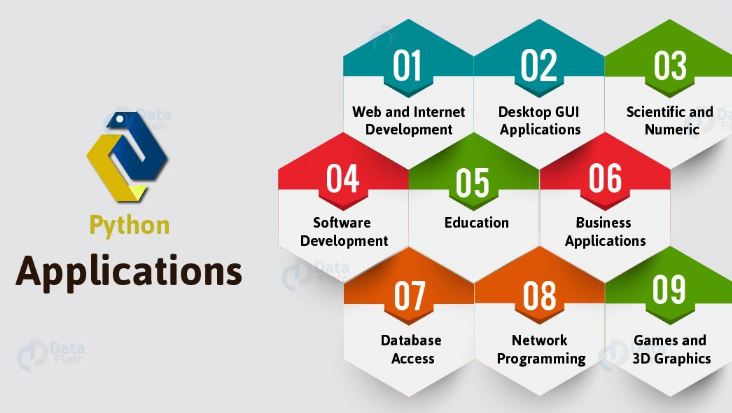 Web frameworks basically help you to create server-side code that runs on your server.

With the use of web frameworks, it has helped in building common backend logic.

You can use either of the frameworks to built web applications.

Flask has fewer components, simpler and more flexible, while Django has more components, a specific way to deal with databases.

Machine Learning with Python has made it possible to recognize images, videos, speech recognition and much more.

To deeply understand the role of the Python in machine learning, let’s take an example. Suppose you have to develop a code to determine the picture whether it is a car or a bike.

To write a code which determines the shape and size of the image would become a lot trickier. That is where the machine learning comes into play. ML typically implements an algorithm that automatically detects a pattern in the given inputs.

In this example, you can give thousand of images to the ML algorithm defining which a car is and which a bike is. It will learn the difference between the two. And when you’ll give the image of either a car or a bike, it will be able to recognize which one it is.

Python is also better for data manipulation and repeated tasks.

The future scope of Python is bright as it also helps in the analysis of a large amount of data through its high-performance libraries and tools.

One of the most popular Python libraries for the data visualization is Matplotlib. It’s easy to start with it and also other libraries depend on it. Also, there are various libraries which can be used for data analysis.

Why Python has a bright future ahead?

Read also : How to Hire a Talented Python Developer?

Numerous programmers have increased the use of Python programming languages and it is certainly used worldwide.

Python programmers would be the most demandable in the future of IT industries which makes Python future brighter.