Python vs PHP? Which Language is Better for Web Development 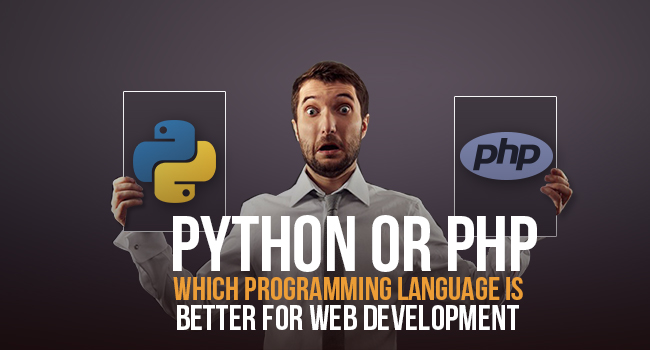 Before exploring the reasons that construe Python better than PHP, let’s first understand what is web development?

It is a wide term used for the work in developing a website for the Internet or an intranet. It includes web designing, web content development, network security configuration etc. It ranges from creating text pages to complex web applications.

In the following sections, we are going to discuss two programming languages and will also try to find out how Python is better than PHP.

It is a scripting language designed for web development which is used to create dynamic and interactive HTML Web pages; it is also used as a general-purpose programming language. It is introduced by Rasmus Lerdorf in the year 1994. The full form of PHP is Personal Home Page but now it is known as Hypertext Preprocessor.

It is an HTML-embedded Web scripting language; which means PHP code can be easily inserted into the HTML of a Web page. It is the fastest source to create database-enabled dynamic websites.

The Key Features of PHP include:

It is the open source of programming which means you don’t need to pay to use it. You can download for free and use the PHP language.

It is very easy to use as compared to other scripting languages. It is very simple and easy and widely used all over the world.

There is no need for compilation as it is an interpreted language.

It is a platform independent language as PHP code can be run on every platform like Linux, UNIX, Mac OS X, and Windows etc.

It is comparatively faster than another scripting language since it uses much system resources.

PHP has a function to generate warning or error notice so that one can easily find the errors & can fix it on time.

But with all these advantages, come certain disadvantages which are discussed as follows.

As we have discussed that it is an open source. All the people using it can access the source code and if there are bugs in the source code, it can be used to explore the weakness of PHP

It is hard to maintain as it is not very modular.

Post this critical analysis of PHP, let us discuss the essential features of Python and see how these two languages compare.

Python is a high-level programming language used for general-purpose programming, designed by Guido van Rossum. It started in 1991 and has a design philosophy that stresses on code readability, notably using remarkable whitespace.

It is used for: – web development, software development, mathematics and system scripting. There are 2 major versions of Python programming language i.e. Python 2 and Python 3.

Python code has a natural style which makes it is easy to read and understand. Hence, making it easy to learn. Some of the key reasons why one should learn and use Python programming language include:

As it is a high-level programming language so while using the python you not need to worry about low-level details such as managing the memory used by the program.

Another advantage of python language is that its coding is quite shorter than other programming languages.

Python does not consist of curly braces; it has a very clear, brief and orthogonal syntax.

Now, let’s look at some reasons for why to prefer using python over PHP

Below are some areas where Python proves its domination over PHP. Thereby, also stating that why it is a rising star in the field of web development

Python has a construction that helps make it carefully considered, well designed and robust language. PHP, on the other hand, seems not to be so well thought out. It is much easier to use Python to write great code.

From the point of view of a developer, one should consider what is likely to create the maximum value for them in the long term. However PHP has a short learning curve but if we talk about the long-term, python is more productive than PHP.

The most suitable framework for Python is Django framework, whereas PHP works on Kohana, Symfony, CodeIgnitor, and Zend.

Python is more readable than PHP and other programming languages. Python is easy to read and easy to learn as well.

The coding in python is comparatively simpler than PHP; it has very clear, brief and orthogonal syntax. The codes are easier to understand and write in python. When we write something in python, it is so simple and effective that you want to show it to others.

By considering all the above-mentioned points and facts we can safely draw the conclusion that Python is much better than PHP in web development. If we think from the point of view of a developer, Python has more advantages over PHP in the long run.