How Python Differs From Ruby in Web Development? 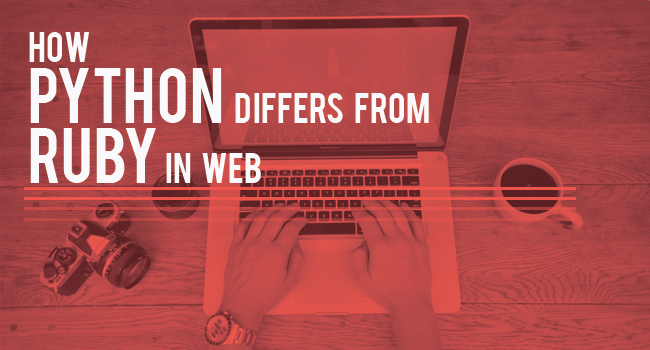 When you are looking to improve the online exposure of your venture, choosing the right programming language for web development is always a challenging task. A number of advanced languages are available at present each with unique features and advantages. Python and Ruby stand out in the list as both of them are open source languages which can be accessed for free without any expense. They look quite similar visually and run on high-level coding with an object-oriented concept. There is a lot in common for both these language and so are its noticeable divergences, especially in the way they solve problems. However, whether it is for web services, web-based apps or to develop a competing website, these languages have proved to be a great choice. And now it causes a dilemma on whether to go for Python or Ruby to build a platform for your business.

There are a lot of areas to be considered before you make a final decision on whether to go for Python web development or Ruby on Rails web development. They run on a pretty different syntax and philosophy. Here we can have a look at how Python differs from Ruby in their role as a good web development programming language.

While choosing a web development language, its learning curve is equally considered important just like their efficiency. A language with clean codes will be easy to understand and that makes Python to top the list of languages with the best learning curve. Ruby can be handled by a programmer who has proficiency in another two or three languages but the simplicity of syntax has made Python the best bet for beginners. The programmers hardly need to remember any syntax which resembles pseudo-code and the explicit code structure makes it easy to debug.

Python has got a direct mode of problem solving whereas it is more of magical for Ruby. Everything is made clear for a Python programmer and they get a clear idea of what they are into. This makes it easy for them to learn the art of coding and at the same time helps them to fix bugs well too. Ruby is more flexible and programmers would be glad to do some tricks to run the program which seems more magical at times and it appears to be empowering for them. But this approach can be troublesome at times when they have to sit for hours to track bugs.

Python is a conservative language which is a lot stricter in comparison to Ruby with better code readability. Both Ruby and Python is speedy and efficient in many respects while the former is more expressive and elegant too. Ruby runs on the philosophy of ‘doing more with less’ while Python’s philosophy is to ‘do things in the right way’. The Python boasts of a dynamic type system and works well with almost all major operating systems. Ruby is known for its speed and adaptation and needs minimal steps to set things up in most of the cases while its counterpart give way for more customization options.

Ruby is an ideal choice when it comes to building high-traffic and complex sites which is designed using pattern-matching structure. More than that, Python serve good for data-heavy sites and the ones that are designed with more calculations. In fact, data scientists make use of this language for data analysis and prototypes. It is shipped with a live interpreter which is text-based that helps users to learn coding on the go with immediate feedback. As resources are easily available on the internet, Python gives better beginner friendliness which is not the case with Ruby and the less frequent updates makes it more comfortable to use.

The web applications using Python are built using Django whereas Ruby uses Rails to set it up. Both of these trusted and reputed open source frameworks run on concepts such as controllers, views, models and database migrations but they differ in the way of implementation. In terms of libraries, Rubygems is the repository of Ruby and Python uses Package Index. Django features a pragmatic design and promotes rapid development. Python also runs on other reputed frameworks such as Flask and Pyramid. A web developer has nothing much to complain about the functionality of these two powerful frameworks.

A diverse community is the strength of Python in comparison to Ruby. Of course, the community of Ruby is growing with the introduction of Rails but cannot maintain the diversity like Python. The Python community has put excellent effort to deliver good documentation with English descriptions making it easy for a beginner to easily catch up and the ‘Doc Strings’ helps them to access it without any searching time. The comp.lang.python is pretty active all the time and the Ruby community is available online and offline.

Python was introduced by Guido Van Rossum in 1991 whereas Ruby came just 4 years later in 1995 and the language was put forward by Yukihiro Matsumoto. Some of the reputed websites built with Ruby-on-Rails include Hulu, Groupon, Airbnb, Shopify, Apple, Twitter and Github. Python is far way more popular with top websites and applications in the list that include search engine giant Google, Pinterest, Instagram, Mozilla Firefox, Washington Post and the National Geographic.

The ease of use is what makes Python to stand out from other languages. It has the support of a number of trusted resources and the developer finds it rare to get stuck up with any project. The other benefits include its simple to handle nature, flexibility, easy integration, quick processing capability and unparalleled performance that enhances the overall convenience and productivity. The feasibility analysis of a project can be done much faster with Ruby and a developer’s perspective can be better utilized. It is referred to as a cost saving technology and in fact it saves a lot of time too if things get right in the first step. And you can use the present custom application’s elements in your upcoming projects without the hassles of making a new one.

Developers love Ruby on Rails web development for its flexibility and freedom whereas Python is loved for its stability over change. When Python web development has a strong client base in the science world and academic applications, Ruby is mostly chosen by start ups. The same web application which is built using Python can be built with Ruby, as well. Despite the pros and cons of the language, it is important to look at how it actually benefits your particular application.

Previous Prestashop Themes Can Professionalize Your Shopping Cart. Know How?
Next 14 Reasons You Should Choose Prestashop for Your Online Store