Will Stephen Hawking’s Prediction About AI (Artificial Intelligence) Be True? 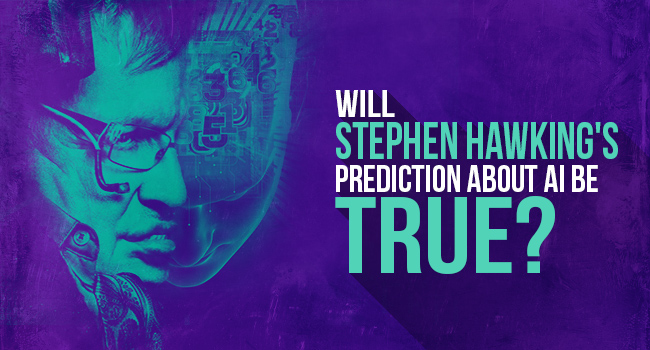 Stephen Hawking was a bright light for the people who were searching in the darkness. The man in his wheel chair has explored and enjoyed life than most of us will ever will. Even though he has gone to be a better place, his contributions to mankind will not be forgotten.

It is indeed true that his greatest discoveries,

Has changed the course of Astrophysics.

However, Stephen Hawking persona was not just limited to physics. He was a man of humor and has showcased it on multiple occasions.

On the renowned show HBO Last Week Tonight, Stephen was asked a serious question by the host John Lover.

“You’ve stated that there could be an infinite number of parallel universes,” “Does that mean there’s a universe out there where I am smarter than you?”

And this was his reply

“Yes,” “And also a universe where you’re funny.”

Controversy has always been a part of Stephen’s glorious life. One of the most renowned ones was his comment about Artificial intelligence at a point of time where people were expecting AI to be the biggest breakthrough of this century.

He said to BBC that,

“The development of full artificial intelligence could spell the end of the human race.”

The theoretical physicist who has successfully defeated Amyotrophic Lateral Sclerosis (ALS) has ignited a big controversy back then with this statement.

The above-mentioned statement was not just made by Stephen alone. He was backed up by Elon Musk, Bill Gates and many other leading scientists.

But is it true? Will AI (Artificial Intelligence) wipe out humanity once it has reached singularity?

For now, it is expected that automation will soon have its dominance by replacing humans in driving cars, and AI shopping assistants but to an extent where they would take over the world is considered to be strange.

However, havoc can be caused if there is a glitch in this automated systems. For instance, stock market crash that happened in the year 1987 was mainly due to a computer error.

The most important flaw of computer or hardware-based system is that sometimes errors can be left unnoticed which can cause a devastating effect.

But, not everyone is against AI. Charlie Ortiz, the head of AI at Nuance Communications said that all these assumptions are over exaggerated and he does not see AI as a threat whatsoever.

Pascal Kaufman the founder of Starmind also stated that those who are passing alarming statements about AI are not working extensively on it.

For instance, latest news is that Google is collaborating with a medical organization to develop an AI program that can diagnose cancer.

Above all, remember be it any machine, it is only good as the date we feed them. So the focus should be on feeding good data to the system rather than worrying about something that can or cannot happen.

Previous Killer Features Of Odoo 11 – How Beneficial Are They?
Next 9 Awesome Design Tips For Your Prestashop Product Page