8 Useful Sublime Text Shortcuts That Will Help You in Programming 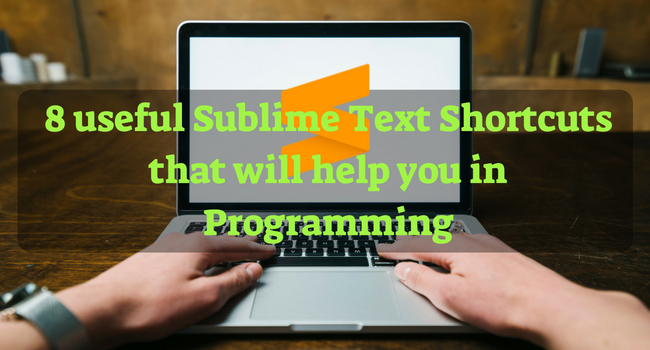 There are many text editor software used widely in the coding world. The Notepad++ was one of the most used editors that haveto be popular for ages among the developers of different age. However, the most powerful text editor that managed to steal the centre light form other is – Sublime.There are so many users that have actually claimed Sublime to be the most useful editor out there.

With the simple and elegant user interface in a combination of admirable feature, it is the topmost editor when it comes to Python Programming. Apart from that Sublime Text has numerous extensions for syntax highlighting, analyzing code metrics and source file searching. For a programmer, it is a blessing with exciting features and capabilities. All you need to do is to import your project in the workspace of sublime and then you are good to go. Hereare the 8 shortcuts that can come handy to be on the path of the sublime text power user.

There isa number of options in the operating system that allows you to search for any file by simply typing in. Sublime Text provides a similar benefit to the user through which you can simply goto the filename rapidly. All you need to use is a command of ⌘ + P or CTRL + P. Through this you will be able to see the file in the workplace.

Integrated Development Environment (IDE) consist of a shortcut key that allows you to goto a particular class name. However, a developer can get confused about the ways to navigate a file. Well, many people use the cheat sheet to check on each and every step that is being performed which will be very much time-consuming. So, why not opt for a simple way. The simple command to use in allow MAC OS to navigate to any symbol/class/function in the file that is being edited is ⌘ + R or CTRL + R.

There are many developers that love to work on multiple monitors at a single type (Yes, multi-tasking people exist). Nevertheless, it is a simple method without any distraction anywhere on the screen which allows you to be more productive and alternative resources can be a huge help. Basically, it provides more screen space in which you can code all you want. You can simply few keys to toggle the sidebar of your sublime text. Make sure that the command is followed up in succession – ⌘ + K and ⌘ + B or CTRL + K and CTRL + B.

The Don’t Repeat Yourself (DRY) is a very good practice of software that comes handy for a long code. However, while working on a project, there are times where you have to copy certain text or lines of code and paste them in another section. In a situation like these, you might get stuck at one point while using sublime text. Nevertheless, there are certain commands that could be used in order to make your life a bit easy and reliable while coding – CTRL + SHIFT + D (Duplicate line) followed by CTRL + X (Cut) and then CTRL + V (Paste) or ⌘ + ⇧ + D(Duplicate Line) followed by ⌘ + X(Cut) and then ⌘ + V(Paste).

The major selling point of the sublime text is this single feature – multiple cursors. When you visit the sublimetext.com website then it is the first feature that will be displayed or will grab your attention. All you need to do is select the word(s) you would like to edit and then follow it with the CTRL + D or⌘ + D in order to select the happening of the certain word one by one. An alternative method to select the occurrence of the words in a particular file is Alt + F3 or ⌃ + ⌘ + G.

If you want to be redirected to a specific line in a specific file then there are different methods that could be used such as loggers and error reporters. All you need to follow to goto any desired line of the line number is CTRL + G or CTRL + G on you MAC OS. However, this command can also be used with the open any files shortcut in order to open a specific file in the workspace of Sublime text Pythons.

The job of programmers, blogger and even tech writers allow them to tap in and interact with the documentation text and specific code. However, the main feature that could be sued in Sublime Text which is kind of avoid by them is a spell check. While typing the code, it is common to have few mistakes here and there, which could be avoided with the help of this command. You can fix your document and code by eliminating the typos. All you need to do is use the function key F6which will toggle the spell check option in the Sublime Text.

It is like an added bonus for the user of Reddit/u/LightShadow. Just like the name goes, it allows you to do anything, all you need to do is tap CTRL + SHIFT + P command together. An autocomplete dialogue or command pallete will be displayed to you on screen through which you can do anything or type in sublime text.

While using Python Sublime Text, you can simply add on the text plugins that can be really helpful for future use.

As a python developer, things can be a bit oftrick by these will help you to get a hang of them with the help of sublime text.

Through this option, you will be ensured that the sublime has been configured correctly that can allow you to delete any type of rambling lines, picking tabs, insert the final newline or pick up space while editing or doing another task. Whenever you save the file in Sublime Text, this will run in the background. For this requirement, all that is needed to configure it the first time and simply forget that it existed. This will allow you to do some simple and static code analysis in several languages including Python. To be honest, it works extremely well with python. This option will allow you to preview your markdown file while you are editing or writing in the file.

Sublime is a powerful command and shortcuts and it is possible that you will simply forget the commands soon. All you can do is to write the command and practice them as much as you can. You will reach a level in which you won’t require a sheet to explain to you the basic commands and shortcuts. The fact is that you need your own help if you are aiming to become a sublime ninja.