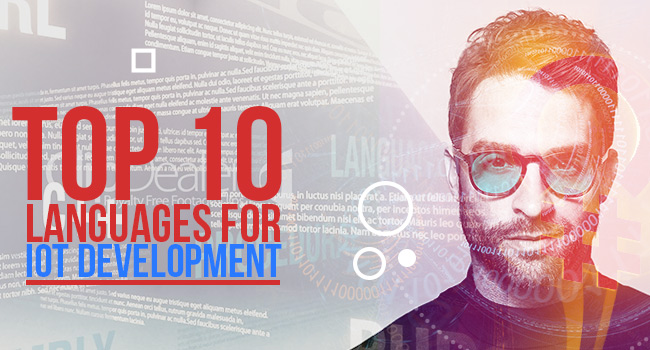 Internet of things is a concept which binds “Things” together making objects even smarter. However, it is clear on how strongly it’s going to impact in the routine life of people.

But if you take a look at the demand for the Internet of Things(IoT), you will realize that it is so much into reality with connected cars, smart thermostats and even the home hubs such as Python, Multiple languages and Node.js to name a few.

So most of you are still curious to know what kind of coding is involved and how does it look like. Ideally, the reason behind its efficient functioning is the use of same languages which are similar to the one that we use on our personal computers and mobile devices.

Other than C, Java, JavaScript, and Python there are many other languages as well which are ruling nowadays. However, when it comes to making a choice amongst it, you are of course likely to get confused. Let’s have a look.

The most popular language, JavaScript, is known for its features in event-driven applications used for all sorts of web browsers. The event-driven applications allow devices to communicate which each other based on events generated by a user.  It can last a long in the market since it makes the devices interoperable and can work well on hubs and servers to gather the data.

This one is another trending one which is mostly used for small applications. But the best part is you can use this language for different platforms with the help of an Embedded Virtual Machine (EVM) which supports B#.

This one is the most common language that is used for creating the iOS apps. To handle the libraries and build up the best infrastructure, such type of source is used by many IoT developers.

For coding, Java is considered as the best source and no doubt is chosen by many developers for IoT development. It has derived its methods from coding languages like Mesa, C++ and many more, which makes it more powerful.

The developers can create and debug the programs on their desktop to later transfer it to a chip which also makes the language a preferred one.

Shares applications that are more similar to C. it is one embed language which was introduced by Google. The best part about it is that it’s more powerful than C language which allows the devices to work in a cordial way by which you can send and receive different data simultaneously.

Though it is not so popular on the list certainly it is one of the best options you can come across. If you want to keep your IoT compact then such low-level programming language is best but you are advised not to have more expectations from it.

If you are thinking about PHP then probably, you can think of blogs and website prototypes. Generally, most of the people don’t use it for IoT but if it is used in the stack, it can juggle micro services on the server. Besides, it has also made a lot easy to put a LAMP stack on a chip.

This was one of the preferences by many IoT developers since its main focus was on the web applications and now can also be used as a scripting language which sticks different coding together. Now it has evolved to such an extent that IoT developers use it as a primary source of language.

Just like Google, Mozilla also came up with another interesting open source language which can do some of the marvelous things that are impossible. It helps to share information through different channels automatically

For the IoT applications, this language is the best one to opt for since it supports all the parallel process. It is important for the developers to know the fact that there is a lot of difference between the parallel and concurrent processors. You can see the same use of syntax in languages like Java, C#, and Python.

The final verdict is that every language above has its own benefits and role to play. But this can change over time looking at the rapid pace at which the technology is evolving. So make your smart choice for smart devices.