What Is Python? What Is It Useful For? 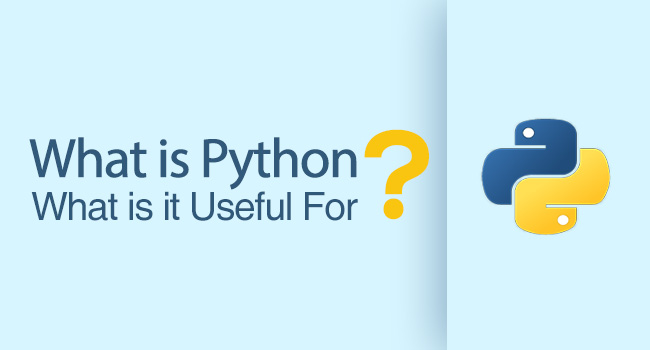 The world of technology has reached to an advanced level. With a number of innovations taking place frequently, it is certain to say that the day is not far when people would begin to find technology and its aspects much easier to understand. One such example from the present times is related to web development, a skill that enables the development of a website to present information related to a certain concept or related to a company’s products/services under one roof.

It is well-known that web development can be done in a number of languages such as C, C++, Java, .Net, etc. While all these languages are quite difficult to understand and gain knowledge even for the developers, Python is one such language that makes this tough task easier for them.

Python is an object-oriented web programming language that was created by Guido van Rossum and released in the market in 1991. The language has an easy to understand and simple to use syntax, shorter codes as well as is fun to use, which, in turn, makes it a perfect language for the beginners in computer programming.

Python contains a number of third-party modules, which, in turn, makes it capable to interact with many other languages and platform. It also has an extensive support library as well as built-in list and dictionary data structure. With an increased speed and productivity, this language is preferred by the developers for building complex multi-protocol network applications.

Uses of Python   An easy to use language, Python can be used in a number of domains and applications. Some of these include:

Python is an excellent programming language to develop web and internet-based applications. This is owing to its features such as simple code, ease of use and high speed. Using Python allows one to choose from varied frameworks such as Django, Pyramid; micro-frameworks such as Flask; and advanced content management systems (CMS) such as Plone. Apart from these, its standard library is also able to support several Internet protocols like HTML and XML, JSON and e-mail processing.

Python holds an important space in scientific and numeric computing. This is owing to its numerous features that support these applications. Some of the exclusive features that support this form of computing are SciPy, which is an assortment of packages for mathematics, science, and engineering; Pandas, a data analysis and modeling library; IPython, an interactive computing used in programming languages that permits one to edit with ease, record a work session as well as supports visualizations and parallel computing.

Since Python is easy to use and understand programming language, this can serve as an excellent option to render education to those at the beginner’s as well as advanced level of programming. Using it will not make programming easier for all but will also make it fun.

Python is an excellent choice to make when opting for a programming language to develop a multithreaded application. Using Python makes it easier to push updates to the devices in a way that allows one machine to serve multiple devices. The language also uses a new form of methodology that has helped in reducing the number of reboots to just one before installation of the new firmware.

Gaming software can be developed easily and conveniently using Python. Its libraries such as Tkinter, Pygame and PyOpenGlsimplifies the process of development to a much larger extent. Python’s GUI related features enable one to develop 3D games using 2D graphics, which, in turn, makes the language much more interesting.

Python is a versatile language that also allows one to easily modify the search engine to meet the specific goals of a client/customer. The results of the search engine can be altered and then, can be used for the exact needs of the client.

The uses of Python are not just limited to these. Instead, the language has established its strong role and presence in other domains as well. This, in turn, has led to a sharp rise in the number of Python based companies in Pune. Since the ultimate goal of every organization is to attain its goal without much hassle, Python must be the option for them.