10 Programming Languages that would be Very Important in 2017 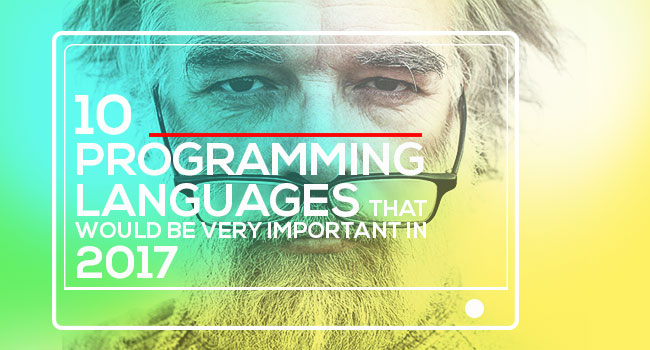 Must Read:  5 Reasons That Prove WordPress is Unbeatable in CMS Industry

JavaScript JavaScript is one of the most commonly used web programming languages. It is used in most of the web pages today as it helps the web developers to manipulate elements and to make the web page dynamic, thus, allowing users to interact with the web pages, click on elements and change the page. JavaScript supports object-oriented programming and procedural programming. Web developers can rejoice as the updated JavaScript, ES2017, is all set to be launched this year. Java Java is another programming language that is here to stay for long. It is an object-oriented language. At present, Java is used by over 10 million developers and is run on 15 billion devices worldwide. It is used to create Android apps, software, games and website content. Some of the popular websites that use Java include LinkedIn, eBay and Amazon. Java9, the latest version of Java, will be out in 2017. Python Python is an object-oriented language like PHP and Ruby. It is similar to English language, making it easy for beginners to learn. YouTube, Reddit and NASA are some websites that use features of Python. Python 3.6, the latest version of Python, was released in December 2016. PHP PHP is a commonly used open-source scripting language used mainly for web development. It aids in the swift and easy expansion of web applications. It is used as the basic foundation of in Content Management Systems like WordPress and websites like Facebook and Wikipedia. The latest version, PHP 7.1, was released in December 2016. Ruby on Rails Ruby on Rails makes it easier to use Ruby. However, it is important to have knowledge in Ruby before using Rails. Many businesses, large and small, have made use of the framework since its launch in 2004. You may have used some of the applications like Airbnb, Twitter, SoundCloud, Shopify etc. that were built with Ruby on Rails. The latest version, Rails 5.1.0 beta1 was released on Februar23, 2017.

You May Also Like: Optimize your Landing Page for Boosted Conversions

Go Go or GOLANG is a Google product and has gained popularity ever since it was launched. It compiles fast and has an outstanding standard library that goes well with concurrent programs. Netflix, YouTube and Adobe are few sites that use Go. Swift Swift is one of the rapidly growing programming languages. It is a product of Apple and their plans for Swift do not seem to end here. Therefore, it is necessary to keep note of the language for its gaining popularity. If you aspire to be an iOS developer, Swift is the language you must learn. Swift 3.0.2 is the latest version that was released in December 2016. Elixir Elixir is a dynamic, functional language that has been designed to build scalable and maintainable applications. One of the notable features of Elixir is its consistency and therefore, it’s great to use for large applications that handle more than one task at a time. Pinterest, Moz and Bleacher Report are some of the websites that use Elixir.