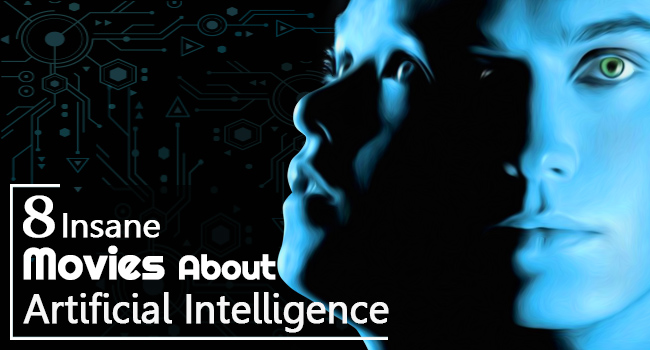 Artificial intelligence movies are awesome!. Even though there is exaggeration you will get to learn cool scientific words and will get a glimpse of how our future will be. But there are movies which have gone over the top, movies which are inaccurate and movies which are over dramatic.

But which one are considered as marvels? Here are list of 8 which we consider as classics when it comes to AI Movies.

AI was directed by Steven Spielberg and released on 29 June 2001(USA). Jude Law, Haley Joel Osment, Brendan Gleeson, Frances O’Connor, William hurt played important characters in the film. It is a science fiction film and was awarded for the best visual effects and best original score at the 74th Academy awards.

The movie is about a robot child named David. It is a tale of humanity and an expedition to discover his place between humans and machines. He was the first robot build by one of the mecha-producing companies who was programmed to love in the distant future, in an age of intelligent machines.

I Robot movie was directed by Alex Proyas and was released on 16 July 2004(USA). The cast in this movie is Bridget Moynahan, James Cromwell, Will Smith, Bruce Greenwood, Chi McBride, and Alan Tudyk. It is a science fiction film and was nominated for best visual effects at the 77th Academy Awards.

The movie is set up is in 2035 AD. In this era, highly intellectual robots all over the world are put to communal service positions and operate under three rules to keep humans safe.

Dr. Alfred Lanning founder of U.S Robotics commits suicide and Detective Del Spooner who has a bias against artificial intelligence comes to investigate the suspected suicide as he believes that it may not be a suicide.

The plot of the story revolves majorly around AI based robots and the good and bad aspect of the technology.

Bicentennial Man is based on a 1976 novel “The Bicentennial Man and Other Stories” by Isaac Asimov. This movie was released on 17 December 1999. Sam Neil, Embeth Davidtz, Robin Williams, Wendy Crewson, and Oliver Platt are in lead roles in this movie.

The central idea behind this movie is to bridge the gap between humans and machines. The story is about the 200 years life tenure of a robot named Andrew. Andrew was bought as a domestic help by Gerald Martin’s family. The robot soon starts experiencing human emotions. How he deals with this change and how he adapts over this time period of 200 years is the central concept.

This is an American movie directed by Wally Pfister. It was released on 10th April 2014(New York). The lead roles have been rendered on screen by Cole Hauser, Morgan Freeman, Rebecca Hall, Johnny Depp, Kate Mara, Cillian Murphy, and Paul Bett.

In this move, Dr. Will Caster is the leading beneficiary and Evelyn his wife is also a scientist. He decides to develop a sentient device that would combine collective intelligence of the human race with complete human emotions.

His popularity brings him in the eyes of the anti-technology extremists and they tried to end him. As a result, Dr. Caster is poisoned and he has only one month left to live, but his wife decides to transfer his emotions to the Artificial Intelligence machine created by them in order to keep him from dying.

But while doing this they are attacked and Evelyn transfers Dr. Casters technological form to internet and this way he himself becomes a part of his own transcendence and becomes unstoppable. What happens after that is the crux of the story.

This iconic movie was directed by James Cameron and was released on 26 October 1984(USA). The cast of the movie is Jai Courtney, Dayo Okeniyi, Arnold Schwarzenegger, Jason Clarke, J.k Simmons, Matt Smith, Lee Byung-hun, and Courtney B. Vance.

It is a science fiction action film and the film being ethnical, traditionally, or aesthetically significant was selected for conservation in the National Film Registry by the Library of Congress.

The movie is based around a futuristic world where Artificial Intelligence has taken over the earth and considers humans as a threat. Consequently, a cyborg from the future i.e. from 2029 is sent in the past i.e. to 1984 on a deadly mission by the machines.

He has to find Sarah Connor who is a waitress and kill her as she and her future son are destined to be a threat to the machine Empire.

To save the girl a soldier is also sent from the future. Will the soldier be able to save the girl and is there any way out to stop the Cyborg? You will get all answers to these questions once you watch the full movie.

This movie was directed by Cardog W. James and was released on 20 April 2013(Tribeca). The star cast of the film is Toby Stephens, Caity Lotz, Pooneh Hajimohammadi, , and Denis Lawson. It is a science fiction thriller film.

In this movie two people from computer programming background fall in love with each other, create a self aware Robot because they are in a great need of perfecting automaton assassination equipment in the war against China, as the United Kingdom’s has only a few weeks left to save their city Taipei, Taiwan from going under china.

But in their desperation they turn the robot in to a Robotic weapon. The whole story revolves around how the robot is stopped from causing destruction and mayhem.

This movie was directed by Joseph Kosinski and was released on 30th December 2010(Tokyo). The stars Garrett Hedlund, Olivia Wilde, Jeff Bridges, Bruce Boxleitner, James Frain, Michael Sheen, Beau Garrett are in lead roles in this movie. It is a science fiction action film.

The movie revolves around Sam Flynn who goes looking for his father him and he gets sucked into a digital world of violent programs and gladiatorial games which his father Kevin Flynn had designed and where he had been living for the past 20 years.

Quorra who is Kevins loyal confident, his father and he himself goes on a voyage of life and death across the visually spectacular replicated space which in the meanwhile has become more advanced and treacherous but the wicked puts in all efforts to stop them. How and if they come out alive from that universe is intriguing to watch.

This movie was directed by Paul Verhoeven and was released on 17th July 1987. The star cast of the movie is Nancy Allen, Daniel O’Herlihy, Peter Weller, kurtwood Smith, Ronny Cox, Miguel Ferrer. It is an action film.

This film is based in a dystopian future Detroit city, where crime runs unrestricted, party due to the incapable and underfunded police department.

As a result, the givernment leaves the running of the police department in the hands of a powerful and correupt Corporation.

In order to tackle the crime and to improve their image in the public eye, the company brings Robocop, who is a Part Man Part Machine cop. What he does and how he responds to crime is worth watching and the plot of the story.

Previous Why Future of Python Language is Bright?
Next Top 10 Exceptional Movies and Documentaries for Web Designers