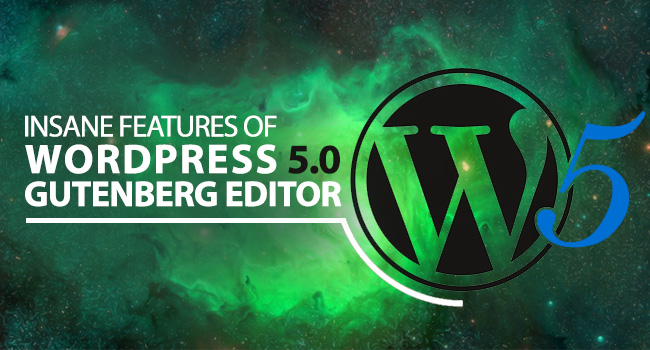 WordPress is finally changing and this time it is forever. ‘If it isn’t broke don’t fix it’, well it was an adage that was used by the creator of WordPress, Automattic.

They have now abandoned this to forge the future of WordPress into something remarkable.

This comes under the attention when the beta version of WordPress 5.0 – Gutenberg has released in 2017 June.

And not we all are set to welcome it in November. But before that you need to understand that it is not just an upgrade, it is much more than that as it will completely replace the tiny MCE editor.

What is WordPress 5.0 – Gutenberg?

The replacement of Tiny MCE editor and a new editor of WordPress – Gutenberg– will change the face of WordPress.

The parent site is now far away from this version of WordPress. The reliable parent is now far away since Gutenberg is not similar to any of the editor that is used until now.

Even the workflow of the new version is different than MS Word that we are used to.

Even for the visual editor user, you are in to experience the most changed version.

On top of that, you can simply forget about copy and paste text, even bullet points, since it won’t go that way.

The latest version of the WordPress used the blocks content creation and edition. In this, the content is saved in a separate block.

If you want to copy and paste then you need to move blocks in order to revise an article.

The thing is that WordPress is ageing with time, it is getting clustered with a number of plugin and theme, and the number of time you have to tap on the preview to see how your post will look like is getting on nerves now.

Well, here is the change every WordPress user was waiting for. Now there is no need to toggle between preview and editor.

Read also : How To Price Your Startup Product: The Right Way!

What Do You Need to Keep in Mind?

If you still believe that it is the biggest change in the UI then you need to think again.

It will be more than just that, all the features that people depend on will be completely altered. There will be new changes that need to be welcomed.

On top of that, the team is still working on the new version; hence, there are many things that are not out in open.

However, no matter how shaky it will be, here is a list that will give you a nutshell of Gutenberg.

If you have used Windows all your life and then all of a sudden you are told to use Mac, you will be lost for some time or maybe more.

There is a high possibility that you will feel same with Gutenberg as well.

The way you used to change the setting of the widget and plugin formatting is completely changed.

Significantly, they have changed the look and feel including the user interface completely.

As mentioned above, blocks are used for content creation and there are many other curves that you need to understand.

The way you will compose and publish your content will also change. You all might have seen the change when Ribbon was introduced to MS Office, it was frustrating.

But no matter what, you all will agree that it was the most productive change that comes into play.

WordPress 5.0 might make you feel lost but once you get a hang of it then you will understand the changes then you will want nothing but to show your gratitude to Automattic.

Do you want to know a fact – Web is not straightforward, well at least not like us.

However, this learning curve can be controlled with the new update of Gutenberg WordPress 5.0 that is associated with blog post composting via WordPress.

Here is the feature of Gutenberg that will it easier for you to understand it:

Gutenberg is all set with all the plugin changes that are primed by the development team.

However, there are certain plugins that will not be updated for the new version.

There are many times that when a system is updated when a user might have to suffer from heavy overhear of even full-time gig that doesn’t support the plugin.

It takes a huge amount of work to be done and not everyone will work on the small changes.

Hence, you need to keep this in mind when you will update to Gutenberg that it is possible few of your plugins won’t work.

Their settings will break, disappear or reduce the functionality until the new version is updated.

However, Yoast SEO doesn’t have to be worried about it.

When we use a certain thing then we started to opt for them and learn them.

But when we are shifted to a completely different format then the horror begins.

In 2017, the beta version of the Gutenberg was introduced and the horror that followed it was unpredictable.

Many of the owners avoided the change at any cost. Obviously, there are bugs in the beta version.

However, the changes are remarkable, visible and easy to rearrange the content work.

The new version was to be released in 2018 start but the released is now pushed to last months of 2018 because the bugs are being removed from it, altering it to more reliable form that can allow productivity to business.

Read also : How To Build Your Own Online Store Using Prestashop

This is almost everything that is out in open about WordPress 5.0.

It might confuse many great minds at the start but when they will start to have a hand of it then they will understand how much appreciable these changes are.

If you want to know more about it then it is recommended to install the Classic Editor Plugin that can give a brief idea about the biggest change of WordPress.

However, you can keep all your doubts aside since it is here to help you with your business and rate of productivity.

It is compatible, just give sometime to understand it.

Previous 31 Python Projects Which Made An Impact Lately
Next Python Structure For Your Project: How to do it?