Python Developer Salary – Entry Level to Senior [In Us Dollars] 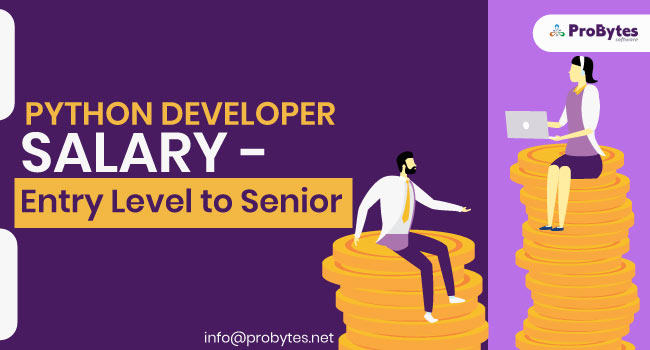 In this article Python Developer’s salary has been estimated by compiling the salary trends for the last 5 years.

Software developers and computer applications allow the interference at the user end to perform certain specific tasks on their machines like desktop and computers. They also help in developing and customizing certain system that is already running through the particular device control.

Although a software developer works in an office and requires an engineering degree in computer science information technology. In a few developing companies you may require relevant job experience but some newcomers with apt talent can be recruited.

What can affect your package?

One must be familiar with various computer languages like C++, Java, PHP, XML, HTML, and JavaScript but in few companies’ knowledge of python is sufficient. Knowing all these languages may add up to the brownie point for sure and enhance your overall package.

Knowing other operating systems like Linux, Solaris, HPUX, BSD, Mac OS X, and windows can enhance your market value for sure. This not only increases the chance of better money and designation but also ensures the long stability within the organization

Knowledge of various other databases like Oracle, PL/SQL, MySQL is also widely used within the business sphere can also increase the chances of recruitment and better money.

A developer should be able to do work in team efforts. A software developing system closely works with each other and other collaterals within the organization. A developer must be able to convey the information to other colleagues in the most informal and non-technical way.

Written and verbal communication skills are also required. They must also be updated with the latest trend changes and day to day updates changes occurring in the technological industry. These changes may be software or hardware, and should be willing and acceptable to the influx of knowledge both at organization and personal reasons.

What a Python Developer Usually Does

On an average, a python developer is expected to accomplish the following tasks within the hiring organization.

These tasks can be handled on both the regular in-house basis within the company or individual as a freelancer as per the wish and requirement of the individual but most of the jobs within the market scenario are for a permanent in-house developer.

As we all know in today’s scenario when many organizations are pushing java on the back and enhancing other developmental and language skills, the craze for the python is touching new heights.

If someone is really into making the carrier option into the python software developmental industry then a clear goal should be set regarding the requirement and demands of the job.

The salary is also the crucial part of the carrier as it is the most important deciding factor on whether one wants to pursue future opportunities or not. This becomes the deciding factor in the forward movements.

A python developer is usually responsible for writing down the server type web application based on logic. The job may be demanding sometimes and also required to finish off the back-end components and the connecting applications with or without the third party involvement.

So both the front end and back working project is finished off by the python developer. Sometimes in many organization python developers also include the advanced open-source framework written over python. A developer may choose the relative choice he wants to socialize in this serves as an added benefit.

Although job data analysis and web development are still one of the major back-ups of python field, machine learning and artificial intelligence are also opening the gates for more python.

More and more systems are amalgamating with advancing artificial intelligence giving way to many software developmental languages like python. As per the recent results of the python developer’s survey 2019, many developments came forward which indicated how favourable the options have become for young minds.

Also, during similar surveys, it was found that python is the world’s seventh most popular programming language in the world. This is being one of the popular languages being used by the software developer. That’s why many large-scale organizations are also preferring the language to use on the professional as well as the commercial front.

Although the frequency of developers preferring this language is increasing widening up the horizon of the industry still needs a lot to be done and the salary is dependent on many things like skills of the individual, level of expertise and the location. This can be easily tracked down to some of the information like industry-driven aspects.

The average salary can be tracked down to many credible sources present online which can give the clear cut information regarding the scope, nature of the job, requirement and the average salary that can be expected. One who wishes to take the full details can find it easily over web portals like PayScale, ZipRecruiter, and Glassdoor.

The average salary of the python developer is a lurking figure and may range up to 77,000 U.S dollars with various bonuses and profit-sharing. We have tried dive the information into the various levels of experience and expertise so that it can be understood and processed easily.

On the other hand, the average salary as reported by the Glassdoor is us dollar 96,000 annually, and when we add to this to the working location again the bracket may fluctuate. Similarly, we compare working in countries like the United States the average salary scales up to us dollar 1, 23,656.

In another website ZipRecruiter that deals with the computing-related jobs database following pattern can be observed:

This shows how experience and location may act as a turning factor. A salary is hugely dependent on the experience of the individual and a hefty amount can be drawn very easily if someone has already handled a list of responsibilities.

The average salary may boost up if a python developer knows Designing and implementing quality protocols and application implementations.

An average salary is dependent on the combination of core skills that include core python, web framework, object-relational mapper and latitudinal architect and developing API’’s. Few additional skills may act as sugar on the cake. These may include system administration, scripting, and knowledge of C++.

As in the article and through the current trend in the market we can say that python has already become one of the most powerful and highest paying programming languages all around the world.

Read Also: How to Hire a Talented Python Developer?

Most of the jobs related to python have been concentrated in the United States of America. So surely this is a promising field and a green signal to go ahead if anyone wishes to make big in the industry.

So, go ahead and trust your interest and calibre to get the best out of the industry as per your expectations.