Future of Java – How Long Java Will Survive? 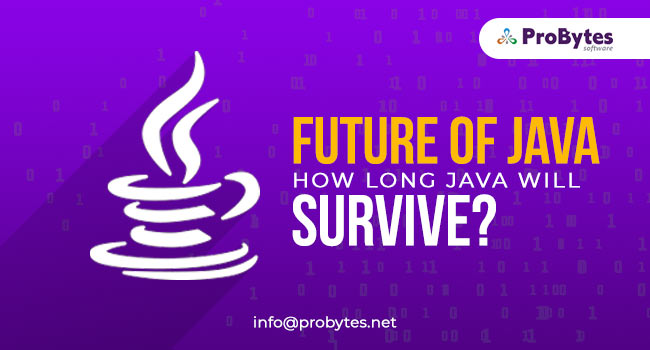 Java is one of the most used languages for programming currently, still being preferred by millions of developers due to its simplicity yet effectiveness. It has been around the corner ever since the craze for computers and programming in the ’90s.

Introduced in 1995, it has been growing strong since then with no looking back. When the introduction was first made, everyone had their shares of feedbacks and experience. It was not well known for its detailing but as it aged down the popularity topped the charts in no time.

It has gone through a lot of rigorous testing and optimization to become one of the most favored languages as we know it today. So, the point of discussion in this article deals with some of the confusing scenery going on in the market like does the days of java are over? Or what is the future of java?

What java has still to offer?

Everyone in the developing industry knows that the decision of language choice is sole and independent. Once various loopholes and strengths are checked upon than the decision can be taken.

Know More : Python Vs Java: Which Is Ideal For Your Project?

There are many points that are lacking in most of the recent choices including Google GO, as it has one of the slowest regex parsers, but the assessment has to be done on how much you require and its function.

Comparison is the key to succeeding in the assessment. With various grounds and parameters like availability of the developer mastering a particular language matter a lot.

Any language can be made fast and furious but cost should always matter especially for maintenance and smooth running, which is no doubt, is required in more than 90 percent cases.

Also, management of the strenuous memory is yet another in trend that needs to be discussed. Hence, we must concord the need of the time rather than the trend. Like in 2016 when swift came in it was a huge success but due to absence of memory management features, it soon faded away from the market.

So, we must state that java is meeting the demands of the strenuous, flexible chip-level and acceptable language within the circle of the developers. This makes the language most used even after years.

As we all know that one of the most complicated and complex developments to make is the multi-core processors.One thing that needs to be considered in the concurrency viewpoint if one wants the most of the outcome from the application is their definite relation.

This might raise few eyebrows as java is considered little lagging when it comes to concurrent programming. But on the other hand, this is also relevant which means we do not need to change our coding practices just to make our systems more accurate and faster due to the enhanced chip-level parallelism which makes it more applicable.

However, the capability of the codes should never be questioned and the advantage of that processors is only codes which makes them applicable to all hardware that too in its full capacity.

Most of these can be very well done with java using the fork/join framework. But we all know that this is not a perfect system and it interferes with convenience. We also make use of many cores without using the code in the stream of parallels.

The hardware can be utilized very well with the help of other techniques in the market too. Like omnipresent non-blocking queues and ManagedBlocker can be a good option in fork/join as well. As in java and EE and other many three-tier frameworks such as ASP.NET, the requirement for the relevance, the application must shift as per the market growth.

Strategic management to develop the alternative platform should be focused which could support the needs application.

What scenario is it Facing today?

Many media within companies have already declared java as the dead log which is not true to its essence. There are many sites flooded with the alarming circle which enforces the users to use the alternative to the java developers which might not be as effective as they seem.

The main issues lie that the focus is being made on the enterprises’ edition of the java that is JAVA EE but not the so famous edition JAVA SE, When it comes to EE, the user prefers it less which has slimmed down many other versions like micro profile also.

When we see the standard edition there are different version as we all know as that of the windows so a similar comparison can be drawn here too. So, the buying capacity is dependent both on the functional requirement and the costing.

So, few features might be missed out in the standard and the SE version but when it comes to JAVA EE it is a fully developed feature loaded platform.

So, we can say that sooner or later java will go revamping itself. This is more or less like reshaping the java in the older bottle so it serves the uniqueness and affirmative both.

As java has a very strong presence in the market, hence it is favored still in many IT professional companies which make the future of java long-standing and evident. New Java 9 has more powerful modules that allow better execution of the processing units and management.

Many new languages are being introduced in between but die off as easily. They do not have the much-holding capacity as Java. Java has been the choice for the developer as they have their own set of innovations and updates which encourages the developer society to have a push for using Java.

Rise and fall of language go on but one should realize the value of java virtual machine, this is quite essential for running the codes. This allows for better sustainability while using the JAVA ecosystem.

What about the competition

Some many languages and programs have been introduced in the market since Java has been in the news, but competition is not suppressing it, but in a way helping it to evolve in a better sense.

Java scripts are turning into more features loaded and adaptive, dynamic language. So, the new versions of Java can handle data fall outs and API also.

All these changes along with times allow the seamless working of Java increasing the hold of the language over the market resulting in many companies still preferring it over trending languages.

Is java dying out in the market scene?

The answer is surely no which is quite evident after going through the information given in the article. When we consider the linking of deep learning and artificial intelligence with the market advancement, we realize that the dealing capacity of an enterprise-level application java is huge; this tracks down to the computing resources which function over the neural net.

As machine learning and AI are infusing the data, the requirement of JAVA increases more than before. There are many talks of the replacement of Java and its components but a wholesome alternative finding would be a difficult task. So, there are traces that could hint us that yes it requires adaptability with changing times, but it is not going anywhere for sure.

One need various language aspect to completely replace Java which is quite difficult on its own. So, it is more tiresome as combining more than two languages makes the whole processing more complex.

There are some replacements in the market that are in  trend but they have major loopholes when we compare them with JAVA like in Google GO there is enough back end language conversion for the servers, which makes it powerful but the usage is limited.

When we see over yet another famous one python, we realize that the use is limited to data science and machine learning due to its scale power. This restricts its usage only to application development. This makes Java most favorite and favorable for most of the developers as well as corporate companies which trust it for the mass production purpose.

This makes Java most favorite and favorable for most of the developers as well as corporate companies which trust it for the mass production purpose.

Java has been in the scene since the 90s and continues to survive for so long ever wondered how and why? It is one of the most compatible languages that has been developed. Stability and usability have a huge impact on users also the larger organization which works on a large codebase system.

Also, the continuous change in the system which makes it faster than the one in the ‘90s has pushed companies to continue using the technology. It also has a vast library backup like JavaCPP.

The concurrency handles in JAVA is much better than its rivals like python. Productivity is also a brownie point along with the easy debugging feature. Java has its own ecosystem that runs deep when it comes to applications and frameworks having better error messages.

Know More : Benchmarking Performance of Python & Java: Which Is Faster?

All these above-explained points very well depict the positive aspect of this wonderful language which is not going anywhere and is here to stay long.

So, we can say for sure that Java has a viable future and growth if it continuously works to grow stronger, with more adaptable features and captive thinking which will help the language outgrow the competition within as well as outside the market.

So, the language promises to be a promising future apt for a larger scale I.T industry.