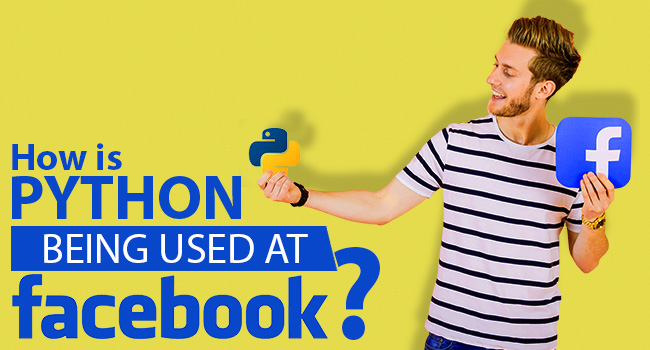 Python is becoming a very popular programming language and many industries are embracing and developing new applications using this language. Google, YouTube, Netflix, and many others are the core examples of popular companies who are using Python.

But do you know that Facebook, the social media king is using Python for various developmental purposes?

Learning about the fact that production engineers at Facebook commonly use Python programming language may surprise Python expert.

Python is the third most favored programming language that is currently being used at Facebook after PHP and C++.

In order to achieve the purpose of hardware imaging, infrastructure management, a binary distribution, and operational automation, a number of Production engineers write code in Python services and frameworks.

The main focus of the infrastructure team is to deliver and maintain Python client libraries for the interface and binary communication protocol that enables other teams who want to interact with them by offering reliable interfaces.

With the help of these interfaces, the amount of code that is written, tested and maintained by production engineers is reduced, enabling them to move ahead at a faster pace in integrating services to Facebook’s infrastructure.

It also helps to scale up the reliability and efficiency of the entire infrastructure. Python helps in maintaining and managing the infrastructure of Facebook.

Facebook’s production engineer own various software, written in Python that enables them to manage the infrastructure and covers the life cycle of their hardware.

Currently, Python is responsible to drive various services at Facebook which are listed below:

Scaling up of the Facebook’s infrastructure has also scaled up the services. Services which were uniform once are now broken into different components.

This division has given rise to a wide variety of general-purpose services for Python.

Read also : How To Make a Social Media Website?

The infrastructure management tools that are used by production engineering are built on various platforms. Hence, these are listed below:

Production engineers use Python to write code which is executed to produce configuration objects.

These objects are later stored in JSON format that can be easily consumed by any other service.

Also, Validators are used to ensure whether these configuration objects are defined correctly or not which is also written in Python.

Python can also be used as a configuration language for container deployment system for Facebook, Tupperware.

The building on top of existing libraries and system has helped many teams in improving their general or own operations at Facebook.

Using Python, MYSQL infrastructure team has developed a service known as MySQL Pool Scanner that keeps their database up to date.

This tool automatically manages and maintain databases in the way same as a database administrator.

Another tool which they have built on top of job engine using Python is Orchestrator that allows their widely distributed binaries to roll out safely with safety checks.

Currently, Facebook codebase uses Python 2 and Python 3 for their various libraries and models (such as Gevent or Twisted).

All the projects on Facebook mainly use Python 3 unless there is a need of using Python 2.

It has become important for a social network side to have real-time updates that make it simple for the people to share with friends.

News feed needs to be updated in real time to make stream relevant and engaging.

To deal with this issue, Facebook acquired Friend Feed’s real-time web framework known as Tornado that helped them to build a site which is updated in real-time.

Tornado is a Python web framework originally developed by the FriendFeed team to handle thousands of connections simultaneously.

Thus, it becomes easier for Facebook to enable real-time services. Initially, it was designed to handle a large amount of web traffic with speed.

Read also : Python Structure For Your Project: How to do it?

With the help of the Python web framework, it has become possible for Facebook to ensure that user’s news feed is updating regularly in real-time.

Previous How Much Does It Cost to Make a Website Like Paytm?
Next Why is Python So Popular in Machine Learning?