Python is the Industry’s Most Preferred Language. Know Why? 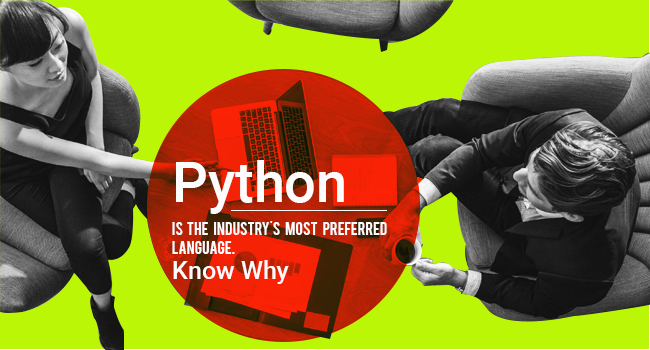 Python is an object-oriented language that has marked its position in the web development industry. This interactive and modular language is dynamic in nature and portable, as well. Its good assistance for reusability mechanisms and its free availability has made it a prime choice for diverse enterprise applications.

In short, the language named after Monty Python is giving a tough competition to its counterparts with lots of improvements on the go.

Its usage is not just limited to one single platform as its excellence can be utilized in a variety of ways. Considering its ease of use and faster to program nature, it is now widely used in a corporate environment too. For many number of reasons, Python is regarded as the industry’s most preferred language. Let’s find out why?

In the IEEE Spectrum ranking for the year for the most popular languages, Python clinched the first position. And most of the schools are considering Python for introductory programming courses. The Popularity of Programming Language (PYPL) ranking based on Google trends has marked Python in the third position. With a growing ecosystem, the language has remained popular ever since it was introduced back in 1991. It can be considered as a glue language that easily links up different segments of a complex solution. Its reliability in use is evident from the fact that its clientele includes many global enterprises such as Nokia, Linux, NASA, JP Morgan, Wikipedia, IBM, YouTube, Mozilla, Weekly News, Bank of America, Google, Ultraseek, Yahoo!, Disney and Yahoo Maps. Python web development is in the mainstream for a pretty long period for its efficiency in handling data-heavy sites.

Previous Benchmarking Performance of Python & Java: Which Is Faster?
Next Top 10 PrestaShop Modules That Will Help Bring High Traffic To Your Website