Yii vs Laravel: Who Will Win the Match? 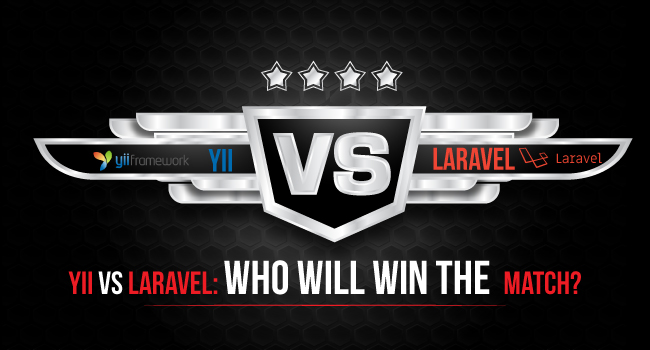 Yii vs Laravel, two of the mighty competitors when it comes to PHP based web-app development! But which on is the best? Which one has the upper hand over the other?

Yii is used for swift development and Laraval is used for developing sophisticated syntax application. Differences do not end there. There are many which can help your to select the winner.

Yii – It is only compatible with PHP 5.4 or any higher versions.

Laravel – Laravel is compatible with a variety of PHP including PHP 5.4 or higher, PHP JSON extension, and MCrypt PHP extension.

Yii is a lot easier to install as a template is provided. You have to download a web application to run the software, which does so smoothly without any hassle. A person without any prior experience can also install Yii.

Laravel uses Composer PHP for installation that ensures accurate installation without any bugs. Apart from that, Laravel has its Laravel Installer that comes with a proper guide to assist you during the installation process. It comes packed with an instruction manual that will help you in installing Laravel correctly.

Yii – it supports most number of testing tools, other than PHP unit and Codeception testing.

Laravel – Laravel is better when it comes to debugging as it offers multiple options including logging and Imho. Even though limited, the Imho is helpful when it comes to solving issues related to laravel-debugbar extension.

Yii vs Laravel – A Comparison

Laravel – When it comes to Laravel, developers have the privilege of including seeders to make the migration process very easy and hassle-free. It also helps in the effective testing process and filling static directory.

Yii – Yii is one of the high performing PHP frameworks, making it the top choice for developing social networking websites and mobile applications.

Laravel – Laravel is not that good when it comes to learning speed curves as it has the slowest speed in response communication and real-time data collection. It is a low point for Laravel, which otherwise is a very efficient and easy-to-use software.

Both Yii and Laravel have six databases, but Yii works with a higher speed.

Yii – Form validation is a lot more time-consuming on the Yii software as compared to Laravel since it can validate data only if the user follows a set of instructions. The developer must collect all data and put it on ActiveRecord for Yii to validate it, which also requires a custom verification.

Also Read: Python vs PHP? Which Language is Better for Webdevelopment?

Laravel – form validation is the most potent feature of Laravel framework since it can validate data in any order and at any time. It has got a reliable ORM that can be used for unification. Laravel also has the option of choosing a variety of validations.

Yii – Yii has around 2,800 extensions, a number much lesser than Laravel offers.

Laravel – On the other hand, Laravel offers compatibility with one of highest number extensions. Laravel has around 9,000 extensions, which means developers have a lot of options to choose.

Laravel – Laravel doesn’t have as many assessing tools as Yii, but by using extensions, you can make it available for your clients.

Yii – Strength and resilience are the two most important factors when it comes to selecting a framework. Yii is an OOP framework, which means it has the advantages of PHP’s advanced features including SPL classes, late static binding, and interfaces. Also, Yii is virtually very extensible and uses the Gii extension, a web-based powerful highly configurable code scaffolding tool, which can be used to create template codes for controllers, models, extensions, and modules in less time.

Laravel – Since Laravel is a full-stack framework, it can handle virtually everything. The framework’s Artisan tool, which is a command-line tool, helps to generate skeleton code and handles everything right from migration to configuration management. It doesn’t require XML configuration like Yii, making it very convenient to use.

Both the framework has its positives and negatives, and it ultimately is the developer’s choice to choose one out of the two.

Yii offers easier installation and higher security, while Laravel has impressive features like better testing procedures and templating engines that add value to your work. So Yii VS Laravel might end up in draw under these circumstances