Python Vs Java: Which Is Ideal For Your Project? 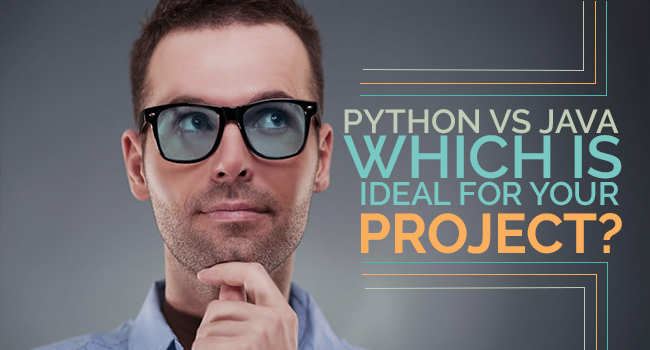 Whenever you are starting a new project, you have a huge choice to make. Which language should be used? Here we discuss about two languages that are commonly compared against each other. – Python and Java.

Python and Java are two prominent programming languages that have gained popularity since the 1990s. Both are different in more ways than one. Hence it pays to understand the intricate details concerning these languages for you to make the right choice to successfully implement a software project.

Read Also: Python vs PHP? Which Language is Better for Web Development

The following rundown of information helps you make the right choice in line with the various requirements of your software project.

Recognized as a language that was in vogue even before Java gained prominence, Python has its roots linked to the year 1991. This was the year of inception of Python,   when it came to be recognized as an open source language.

It is important to note that the onus of managing design specifications coupled with the regularization of language and its libraries lies with the Python Software Foundation. On the other hand, all concerns about development come under the purview of Python Enhancement Proposal (PEP).

Positives in Favor of Java

Originally designed for interactive television, Java came as an advanced version for the fundamental demands of digital cable industry that was flourishing in the 1990s.

Initially known as a portable internet language which is compatible with a browser, Java came a long way, by ultimately recognized as the most learned language by software developers.

Starting with classroom lectures, this language gained dominance to take on the mantle of a highly ranked language of millennium.

The striking features of Java that set it apart from other languages are its efficiency and portability. Typically a compiled, object-oriented language, the success of Java stems from its machine-centric characteristic; unlike Python which is strictly an interpreted language.

It will not be an exaggeration to quote that Java is not just a language supporting libraries. You can call it an ecosystem or a virtual machine, running on the premise of Write Once, Run Anywhere (WORA).

What is a Java Virtual Machine (JVM)? This is a standardized and portable platform on which you can run your Java code. It is through the presence of JVM that programmers can compile and execute any byte code.

Before we go into the details about which language can be used to code a particular project, it makes sense to collate their striking differences based on certain important parameters.

Differences between Java and Python:

The Choice of Language to Code a Software Project

Having understood about the intricate details concerning both the languages, now is the time to zero in on a befitting programming language to successfully complete a software project.

For your convenience, let us now delve into your project requirements that can be delivered by either Python or Java. The multiple scenarios which are in favor of a particular language are elucidated under their respective heads.

Projects That Can Rely On Java

A Perfect Bet for Huge Projects

If your project entails upon building a large-scale system, you can rely on Java on account of its superior performance. It is solely on account of this positive that huge social networking sites which thrust a great deal of importance on scalability and speed are skewed towards Java.

Sites like LinkedIn, Facebook and Twitter are perfect examples which employ Java as their scripting language as a part of delivering data engineering solution to the global platform of internet users.

JVM is an environment that encourages the development of customized tools. An additional benefit comes in the form of facilitating faster development of projects that demand a combination of functional and object-oriented programming.

Read Also: What are the Pros and Cons of Python vs Java

Hence, Java can come as your top choice for projects that demand efficiency with optimizations to virtual machine execution.

Python Can be a Top Choice for the Following Projects

Python promises a lot of flexibility when it concerns scenarios demanding analysis of data along with projects which are based on the application and implementation of certain statistical techniques. It is for this sole reason that Python is primarily the most patronized language amongst software developers.

Capable of addressing both these requirements, Python extends a helping hand to developers by facilitating their tasks to work in tandem with web applications in a number of production environments.

Hence, to sum up, Python can play a vital role in projects that are coded to manage the data workflow of the entire project.

If your project demands the use of an outdated computing technology, then it is best to lay your bet on Python. This is for a simple reason that Python poses lesser legacy issues.

It is for this main reason that organizations pick Python to ensure the sound health of the entire IT infrastructure framework.

It is through Python that you can successfully code and implement a project which demands typical machine learning libraries like TensorFlow, PyBrain and scikit-learn.

Python employs the features of these libraries to bestow a favorable situation of general-purpose flexibility.

Hence all those projects that require the creation of sophisticated models can employ Python as it is a promising interface to churn out prediction engines that can be directly appended to the production system.

4. Looking to Code a Portable Project?

A loud shout out goes in favor of Python since it promises the feature of simplicity coupled with a convenience to compose various codes. Here comes the benefit of portability when Python can be employed to interpret languages that run on multiple platforms. This is a positive favoring general software development.

In keeping with all the above mentioned positives, Python comes across as an all-purpose language that is assembled in tandem with an extensible object model.

Thus, if your project involves modular and procedural programming, you can safely proceed with Python coding. Additionally, Python is capable of meeting the partial requirements of certain phases of functional programming.

After discussing everything concerning both these languages to the smallest detail, it is apparent that Python and Java are here to stay. Poised for the long haul, these two languages which have their roots linked to the 1990s are steadily replacing other scripting languages alongside posing a stiff competition to other promising languages.

Read Also: Yii vs Laravel: Who Will Win the Match?

Since both the languages support the open-source technology, it becomes easy for the management to operate with a sense of openness not only with their clients but also with software developers and various teams. This very open mind can thus prompt organizations to make a befitting language choice as far as Python and Java are concerned.

Previous 16 Reasons Prestashop Is Better Than Magento
Next What Are the Highlighted Features of Prestashop 1.7