31 Python Projects Which Made An Impact Lately 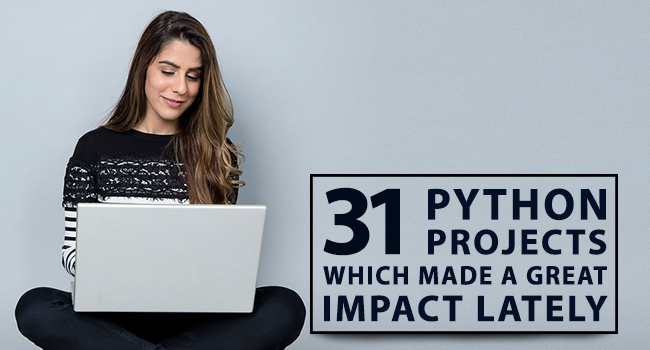 Python is undoubtedly one of the most successful programming languages as it is still a very simple language.

It’s practiced in several domains, like web development and automation. These days, Python has further become a default language for machine learning projects and data science as well.

All due to its flexibility and power. This is another reason why many Python projects are initiated frequently every year.

Keras is a high-grade neural systems API which is written in Python. It’s equipped for running over TensorFlow, Theano, or CNTK. It was created with an attention on empowering fast experimentation.

Keras is been primarily created for quick and easy prototyping through modularity, user-friendliness, and extensibility.

It sustains recurrent networks and convolutional networks both, and in addition the combinations of the two as well.

Dynamic and Tensors neural systems in Python with robust GPU acceleration. It’s standing on 11019 stars on Github and is developed by the service of Adam Paszke and others at PyTorch Team.

One can reuse their preferred Python packages like SciPy, NumPy, and Cython to enlarge PyTorch when required.

PyTorch project package is used either as a substitution of NumPy to utilize the potential of GPUs or as a deep learning analysis platform which gives the greatest speed and flexibility.

It’s a productive and simple tool for data analysis and data mining, available to everyone, and reusable in the different setting.

This project was commenced as a Google Summer of Code project by David Cournapeau in 2007, and from then several volunteers have contributed to this project’s functionality.

It is based on matplotlib, NumPy, SciPy, open source, and commercially usable.

The library includes a plenty of efficient tools for statistical modeling as well as machine learning comprising of classification, clustering, regression, and dimensionality reduction.

It is also beneficial for extracting peculiarities from text and images.

It is created by Ziyad Yehia which is one of the best python courses available on Udemy. This project-based course provides you to build 11 projects in this course.

For those who appreciate hands-on learning while at the same time dealing with the project as opposed to learning specific ideas.

This is a thorough and carefully prepared course that teaches you everything.

With this course, you will learn to build personalized and meaningful user experiences by using Strings and creating programs which can imagine using logic and data frameworks.

Additionally, it also teaches you to automate coding jobs in making your individual python functions.

This repository is for solving theproblemsof the traveling salesperson with the help of self-organizing mapsto obtain sub-optimal answers for the problems.

Created by Diego Vicente this project has 343 stars rating on Github.

Read also : Why Future of Python Language is Bright?

Theano is titled after a Greek mathematician. Theano has launched under the BSD license as an open source project and was created by the MILA (then LISA) group at the University of Montreal, Canada.

It enables you to define, advance, and assess mathematical formulations including multi-dimensional arrays productively.

It understands how to use your structures and convert them into highly dynamic code that utilizes NumPy, native code (C++), effective native libraries such as BLAS to work as quickly as possible on GPUs or CPUs.

The individuals who are involved with cryptocurrency and blockchain would discover this project intriguing.

The blockchain project with 779 stars on GitHub will enable the engineers to devise a Bitcoin clone as a feature of the project.

This is bizarre as it enables you to preserve your mined hashes and exchange them out in any of the supported currency.

This excludes the trouble of changing pools to mine various coins or having to shift miners.

This program is based on two Python packages – Scipy and NumPy for logical computing.Also, it is easy to plug into your own input corpus.

The target audience of this software is the information retrieval (IR) and natural language processing (NLP) community.

Sentry in a general sense is an administration that supports you manage and fix crashes in the real-time. The supported frameworks and languages of this tool are Python, Ruby, Java, JS, iOS, Django, .NET etc.

The server is in Python; however, it comprises of a full API for transferring events in any application, from any language.

It observes errors and shows when, where, and to whom they befall, ensuring to do so without depending entirely on user review.

Read also : Learn How To Host and Deploy a Web App Using Python and Heroku

It is a machine learning library. The vast majority of its functionality is based over Theano.

This implies you can write Pylearn2 modules such as algorithms, new models, etc.

It is a library for automatically creating command line interfaces from totally any object of the Python. It’s a creation of David Bieber and others at Google Brain with the rating of 7775 stars on Github.

It is a valuable tool for generating and debugging Python code.Just write the functionality you need to be detected at the command line as a function/module/class, and next call Fire. With this extension, your CLI is set to go.

Facebook AI Research’s product framework that performs best in class algorithms for object detection, incorporating Mask R-CNN. This is controlled by the Caffe2 deep learning system and is written in Python.

Binary information diffing for various objects or surges of data.

With 188 stars rating on Github under the courtesy of Juha Kivekäs, its motive is to make machine-learning data simpler to comprehend by people that perceive it.

In particular, multi diff serves in the review of the differences inside a vast set of objects by performing diffs between applicable objects and showing them in a sensible way.

It recognizes and controls faces from Python or from the command line with the use of the world’s easiest face recognition library.

Rebound is also a command line tool that in a split second brings Stack Overflow results if you get a compiler mistake.

This is an extremely convenient library for software engineers.Rebound is supported on MacOS, Windows, and Linux platforms.

A Python-based, independent open source system made for deep learning models. It gives an intuitive, adaptable, and elite methods for performing a full scope of deep learning models, comprising of best in class models, for example, variational auto-encoders and recurrent neural networks.

It is a Python module that enables users to evaluate statistical models, investigate data, and perform statistical tests.

A broad rundown of descriptive insights, plotting functions, statistical tests, and result statistics are accessible for various kinds of data and every estimator.

The project is ranking on 554 stars on GitHub and as a major aspect of the arrangement, the programmer should distinguish and bypass web application protection and firewalls frameworks.

Designed to make beginning easy and fast, with the capacity to scale up the complex apps. Flask is a lightweight WSGI web application system.

It started as a basic wrapper around Jinja and Werkzeug and has turned out to be a standout amongst the most well-known Python web application systems.

It is a Python module for simple and quick statistical learning on NeuroImaging data. It influences the scikit-learn Python toolbox for multivariate insights with apps, for example, classification, predictive modeling, connectivity analysis, or decoding.

Pipenv is principally intended to offer developers and users of apps with a simple strategy to configure a working environment. It brings the best of all packaging versions like composer, bundler, npm, yarn, load, and so forth. to the Python world.

An open-source repository to discover numerous models and libraries identified with deep learning. In the event that the Machine learning and Deep learning are your forte, this is for you.It has surged in prevalence with over 1500 projects suggest on Github.

Mask R-CNN is for segmentation and object detection. The usage of Mask R-CNN on Keras, Python 3, and TensorFlow.

It depends on a ResNet101 backbone and Feature Pyramid Network (FPN). The model creates the enclosing segmentation and boxes masks for each example of an object in the picture.

It is a tool created and managed by Hanno Böck. It searches for secret files available on web servers that shouldn’t be public and can represent a security threat.

It’s usually employed for the detection of sensitive information or data leak discovery. Target users for this tool are security professionals, developers, and system administrators.

Tool for industrial-strength Natural Language Processing (NLP) with the help of Cython and Python. The fundamental ease of use you will see in spaCy v2.0 is around explaining, instructing, and loading your own particular components and models.

The new neural system models make it substantially simpler to prepare a model starting from scratch, or refresh a current model with a couple of cases.

It’s a 3D rendering library written totally in Python with 83 stars on Github. There is a monotony in this library which limits the reliance on external libraries so individuals can’t waste time anywhere else.

The conditions for this project are almost minimum so that majority of the people can run it easily. These include NumpyScipy, and Python Imaging Library (PIL).

It is a research project examining the job of machine learning during the procedure of producing music and art. Basically, this includes generating new reinforcement learning and deep learning algorithms for creating tunes, illustrations, images, and different materials.

Though at the same time it’s a research in building brilliant devices and interfaces that enable musicians and artists to expand their procedures utilizing these models.

A proficient and strong Python project which plans to put a usage of Python 3.x on microcontrollers and small embedded frameworks. It has secured 5728 stars on Github.

MicroPython can produce scripts from the precompiled bytecode or textual source form, either from frozen into the MicroPython executable or an on-device filesystem in both the cases. It executes the whole Python 3.4 syntax structure.

However, this project is in the beta stage and is liable to changes of the code-base.

Developed over Plotly.js, Flask, and React, Dash links present-day UI components like sliders, dropdowns, and charts specifically to your expository python code. It does not require any JavaScript.

Moreover, Dash application code is receptive and declarative, which makes it simple to fabricate complex applications that include numerous interactive components.

It is a cross-platform, an open source Python system for the advancement of apps that make utilization of inventive, multi-touch UIs.

The objective of this Python project is to permit fast and simple interaction design and fast prototyping while making your code deployable and reusable.

Previous How To Price Your Startup Product: The Right Way!
Next Insane Features of WordPress 5.0 Gutenberg Editor